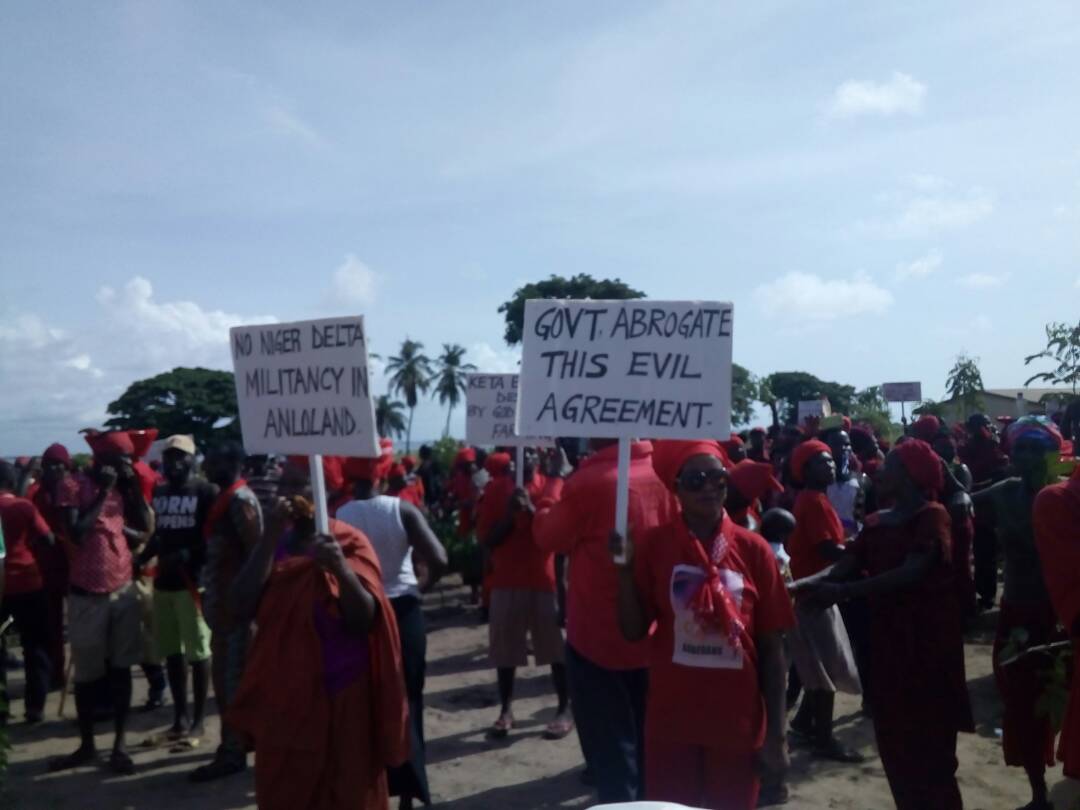 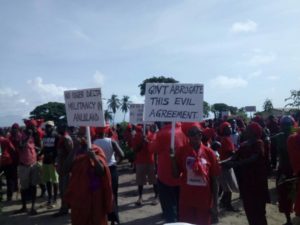 Hundreds of residents from communities in the Keta Municipality, clad in red, Thursday hit the streets to register their opposition to crude oil exploration and salt mining in the Keta Basin of the Volta Region.

The demonstrators, including the aged, some supported by walking aids, bearing placards, sang and danced to war songs before finally converging at the “Hogbetsotso” park.

Some of the placards read: “Government, abrogate this evil agreement”, Keta Basin is a Ramsar site, so keep off”, “No Government can relocate us”, “oil exploration is not the way for our area” and “no Niger Delta militancy in Keta Basin, please”.

Others were “No way for you in Keta Basin”, “Keta Basin is divinely designed for shrimp farming”, “Anlo chiefs, wake up from your slumber to lead in this new war” and “please, don’t destroy our land”.

Mr. Roland Tudzi, Chairman, Keta Municipal Vegetable Farmers and Marketers Association (KMVFTA), the protest organizers, in a petition, described the projects as “a stab at the back of the people” by the previous National Democratic Congress regime, which he said the people were still supporting.

He accused unnamed “self-seeking elements” in that regime, alien to the area of “wickedly and diabolically” demarcating the Basin into salt and oil blocks for their cronies, without recourse to the rights of the people in the 1992 Constitution and the international Ramser Convention.

He said the people were farmers and fishermen and that the expected damage of the environment would destroy their mainstay for good.

Mr.Tudzi argued that oil spillages and chemicals for drilling explorations would pollute both surface and underground water sources, resulting in extinction of aqua-culture and it could cause earthquakes.

He appealed to the Government to save the people from a looming disaster of gross environmental degradation, which could lead to displacement and impoverishment.

Mr. Tudzi said under Ramser terminology, Keta Basin was a “fragile ecosystem” that needed to be handled with care.

He also accused the Ministries of Agriculture, Environment and Mines and agencies such as Water Commission for failing to advise the past government on the ranking of sustainable development of the Keta Basin.

He said studies by the Oceanography Department revealed that the development of the Keta lagoon’s flood plain was more beneficial than oil and salt, and suggested the construction of ponds to be stocked with shrimp larvae from a hatchery in Ada.

He also brought to mind the need to dredge the Keta, Avu and other lagoons and annually breach the sand bar at Havedzi to allow the flow in of shrimp larvae and eggs of marine fishes from the sea to boost fishing.

Mr. Daniel Sallah, Treasurer, KMVFMA, said they initially thought the exploration was offshore but came to realise it was in the lagoon.

Mr. Seth Yormewu, Keta Municipal Chief Executive, who received the petition, commended the people for the peaceful demonstration and promised to forward it to central Government.

A group of the demonstrators later converged at the gate of the Awoamefia of Anlo, Togbi Sri III, apparently to establish their frustration at the absence of chiefs in the demonstrations, but the police quickly condoned the gates.

Meanwhile the group is reported to be heading to the law court for a declaration to forestall oil exploration works in the area.

Ban on drumming and noise making in Accra begins May 14