May 10, 2018 Africa/International Comments Off on German business looks to EU, government to protect Iran deals 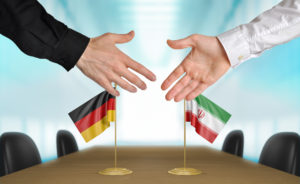 The outlook for German-Iranian business relations is gloomy after the US said it plans to reimpose sanctions on Tehran. But German companies are hoping that their government and the European Union will come to the rescue.

Berlin (dpa) – Following the United States’ withdrawal from the Iran nuclear deal, German business is hoping for support from its own government and the European Union to safeguard its exposure to the Iranian economy.

The Federation of German Industries (BDI) and the Association of German Chambers of Industry and Commerce (DIHK) on Wednesday called for business ties between EU countries and Iran to be protected, while the BGA trade association predicted chaos.

Following President Donald Trump’s Tuesday announcement that the US will withdraw from the deal and reimpose sanctions on Iran, US ambassador to Germany Richard Grenell called on German companies to wind down trade with Iran “immediately.”

The main problem in doing business with Iran is the reluctance of international banks to finance business deals.

European banks with operations in the US have in the past been wary of issuing loans, even after the partial lifting of sanctions, as other sanctions remain in place.

However, the EU has said it remains committed to the deal and could seek to limit the economic consequences of the renewed US sanctions.

Although Germany is one of Iran’s largest trading partners in the EU, two-way trade remains modest, even after the easing of sanctions following the mid-2015 nuclear deal.

According to the BGA, trade topped 3.4 billion euros (4.0 billion dollars) in 2017, with Iran benefiting more than German exporters, on account of its oil exports.

The DIHK said the US decision had cast a cloud over German-Iranian business ties. “The German government and the EU are called on to protect EU-Iranian trade and to restore the confidence that has been lost,” it said.

The BGA called on the US authorities to make public as soon as possible information on how to deal with the new situation, so that companies can act appropriately.

“But that too will only limit slightly the chaos that we are now expecting,” BGA President Holger Bingmann said.

“Companies are worried that they will lose US business as a result of trading with Iran,” the DIHK said. “After all, European companies in the real economy are already threatened with fines in the US if their Iranian business partners are on US sanctions lists.”

Many of the sanctions would affect German companies, even if the EU did not itself impose sanctions, it said. In addition there was no clarity over whether the US would acknowledge existing agreements.

BDI President Dieter Kempf called on the EU to secure a clear commitment along with Russia and China to the agreements made in the Iran nuclear deal. “Our companies had great hopes from the opening up of markets as a result of the lifting of sanctions,” he said, noting that the outlook was now troubled.

The VCI chemical industry association called for the deal to be adhered to. “As long as Iran does not infringe the provisions of the deal, all other states that are party to the agreement should stick to it,” VCI head Utz Tillmann said.

The VDMA mechanical engineering industry association said the ball was now in Iran’s court. “They must take a decision on whether the nuclear deal is to continue independently of the US – which would be the best solution on all sides,” VDMA managing director Thilo Brodtmann said.

“As long as the EU does not reactivate its sanctions on Iran, German business can continue legally to do business with Iran,” he said.