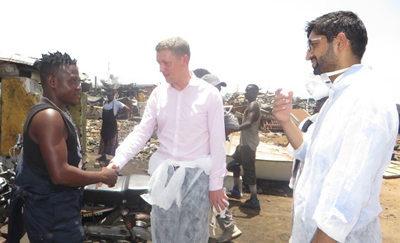 Mr Iain Walker, the British High Commissioner to Ghana, has paid a visit to the Agbogloshie e-waste dumping site in Accra.

The purpose of the visit was to enable the High Commissioner to acquaint himself with the activities of Agbogloshie.shine Initiative, a Non-Profit Foundation that seeks to fund social enterprises and projects dedicated to applying design-thinking to solve problems regarding e-waste.

The Agbogbloshie e-waste site is the destination for locally generated automobile and electronic scrap collected from across the City of Accra.

It is alleged to be at the centre of a legal and illegal exportation network for the environmental dumping of electronic waste (e-waste) from industrialised nations.

According to the Blacksmith Institute, a New York NGO, the Agbogbloshie e-waste dumping site was the most toxic place on the planet.

The High Commissioner interacted with artisans who were into waste recycling, and those who were burning electronic waste products to extract copper from them.

In addition, he interacted with some of the middlemen who were there buying the copper products for exporters.

In an interview with the Ghana News Agency (GNA) on the side-line of the tour, Mr Walker commended Agbogloshie.Shine Initiative for their laudable initiative to recycle waste and to providing skills training for the youth of Agbogbloshie.

“In context, waste management is a major problem. And I will like to know a bit more about why and what, if anything the international community can be doing to assist the government here to address some of this,” Mr Walker said.

He said at the end of the 2018 Commonwealth Heads of Government Meeting in London, member countries including Ghana and the United Kingdom signed to the Blue Charter, which was a bold, co-ordinated push to protect the ocean from the effects of climate change, pollution and over-fishing.

He said there were about one million plastic bottles bought everyday across the globe, of which each one of them took 650 years to degrade.

Mr Walker suggested that something be done to combat the plastic menace in the Ghana and the problem at Agbogloshie was beyond plastic, which needed urgent attention from the Government of Ghana and other stakeholders to address it.

“So we would not be buying single used plastics bottles for water. We will be using recyclable water, we will not be using straws, these are small things that don’t change the world, but if we want to do it, we can take responsibilities ourselves.”

He said Ghana being one of the most forward thinking leading nation in Africa had the opportunity to take the lead nationally and regionally to promote the fight against waste.

“I hope they take it with the UK and some other international partners because this is not an individual issue for Ghana. This is global challenge but is one that starts at home. My plea is that we take it seriously and do something about it,” he said.

Mr Woode said the Initiative was into design thinking and finding solutions to the waste problem at Agbogloshie.

He said the organisation was providing skills training such as welding for the youth of Agbogloshie to enable them go into entrepreneurship.

Mr Abdul Rahman Abdellah, one of those burning e-waste at the Agbogloshie e-waste site, told the GNA that although their activities were hazardous to their health and the environment, they had no option as they could not afford to stay unemployed.