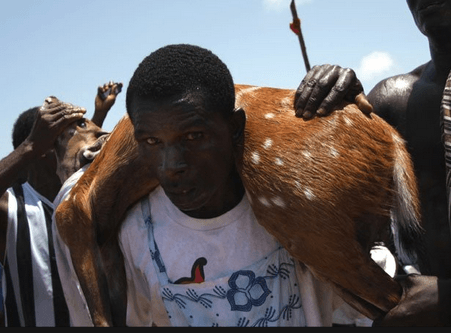 The Chiefs and People of Effutu Traditional Council have launched their 2018 Aboakyer festival to Mobilize funds to construct a new palace for the paramountcy.

The festival with the theme: “Sourcing funding for a key project and initiating a revival of our ancient Asafo cultural practices,” will commence on Friday April 28, with the Aboakyer Marathon race.

Neenyi Ghartey VII, Paramount Chief Area and president of the Effutu Traditional Council, who launched the festival at a ceremony in Winneba said, from time immemorial they have been using the Aboakyer celebration to consecrate and appease their deity.

He said the launch was to give notice to all stakeholders to hold themselves in readiness for the actual celebration.

“This new edifice will give this community a new image since most of the palaces build in the late 1800 have all collapsed” and called on well-wishers, philanthropists and cooperate organization to support the traditional council to see the project through”.

“As we celebrate this our unique festival, we are putting a number of our people in business as they participate in providing diverse services to the numerous guests and it is in this regard that, we call on all to ensure a peaceful celebration in their own small way to supplement our continues dialoguing for a successful celebration”, he said.

Neenyi Ghartey VII said the Aboakyer festival is the King’s festival with a unique tradition, bequeathed to them through successful celebrations and keeping the religious and culture aspects just as it used to be.

“Today, there is pressure from other cultures threatening to adulterate ours, adding that, that the paramountcy will this year award the best Asafo costume and the best indigenous Asafo sonds and Asafo groups, as a way of reviving their cultural heritage, he stated.

He appealed to the people of Effutuman to fully participate in activities earmarked for the occasion and contribute generously towards it so that the dreams and goals of the traditional council will be achieved.

Later the Twafo No. 1 and Dentsifo Asafo companies, who were among the groups and personalities at the event, sang their war songs to signify the launch of the festival.

Other activities for the festival include a Church service on May 29, a Sanitation Day on April 30, a Regatta and Tug of war on May 1, and a Health Walk and Screening, and Football (gala) on May 2.

There would be float on May 3, whilst the two Asafo groups will parade their gods through the principal streets of Winneba and the beating of the gong-gong to eliminate all negative forces ahead of the impending festival Day.

On the morning Saturday May 5, the festival Day proper, the two gallant Asafo companies will go hunting for a live deer and the first group to arrive at the durbar ground with their catch will present it to Neenyi Ghartey VII, who will step on it three times as part of the traditional and customary rites.

In the afternoon, the Chiefs and the Asafo groups will process through the principal streets of Winneba amidst frontomfrom drumming and dancing to the Omanhen’s Palace and in the Night a State Dance will held to crown the Miss Aboakyer on May 6.