Unlocking the potentials of the Volta Delta Basin through integrated planning

March 13, 2018 Feature Articles Comments Off on Unlocking the potentials of the Volta Delta Basin through integrated planning 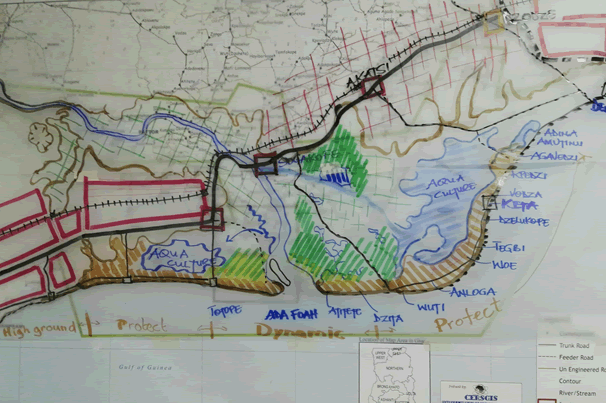 Deltas across the world are important landscapes of production and habitat for mankind and animals. Ecologically, deltas serve as important wetlands, which are home to unique biodiversity as well.

Deltas are however increasingly becoming vulnerable due to human activities, population growth and natural forces of climate change and subsidence.

Indeed, deltas are economic and environmental hotspots and a habitat for high population densities, estimated at over 500 million people globally, with particular concentrations in South, East, South-East Asia and Africa.

It is often a patchwork of marshes, swamps, lakes and tidal flats. Deltas have long played important roles in human history; indeed, none has had a greater role in civilization than the delta of Egypt’s Nile River. Greek historian, Herodotus (c. 484- c 425 B.C.E) considered ‘Father of history,’ studied this geologic feature, and is credited with coining the term ‘delta’ for this type of landform because of its triangular shape, and again a symbol widely used Mathematically.

The Volta Delta is one of the small but unique deltas in the world with population estimates of almost a million people. It can be located in the eastern part of Ghana’s coast, specifically in the lower Volta basin, and it has huge untapped ecological and economic potentials and values.

The situation in the Volta delta is not different from the global one as identified by the Intergovernmental Panel on Climate Change as being especially vulnerable hotspots for climate change and sea-level rise, coastal erosion, intensive urbanisation as well as poor land use planning and understanding of possible adaptation responses.

It is no surprise therefore, when a 13.5 million Canadian dollar DECCMA (Deltas, vulnerability and Climate Change: Migration and Adaptation) project was instituted, which tasked researchers in selected regions with deltas to investigate how to better derive utility from the resource.

The DECCMA project, aims to develop methods to predict how four deltas, the Nile in Egypt and the Ganges-Brahmaputra in Bangladesh and India, plus two smaller deltas – the Mahanadi in India and the Volta in Ghana – may evolve over the next 50 to 100 years and provide governments with the knowledge and tools to ensure future policy could maximise planning services and programmes to the benefit of the region’s population.

Aiming to increase the resilience of deltas through knowledge exchange, capacity building, peer-to-peer learning networks between delta regions of the world, the Delta Alliance, a global knowledge-driven network of delta regions with secretariat in the Netherlands, and the Ghana wing of the Delta Alliance under the auspices of the Development Institute (The DI), a Ghanaian NGO, have risen to deepen advocacy and integrated approaches, necessitating the formation of a multistakeholder inclusive regime with development partners and the academia to navigate the issues to inform policy.

Its objectives are to improve the understanding of the complex challenges of the Volta Delta basin, develop guiding principles and key strategies for an integrated action as well as select innovative solutions for specific problems such as coastal erosion, sea-level rise and unplanned landscape.

This plan is expected to help structure a formal land use and zonal planning and complement on-going discourse by the government, now that discussions on the Coastal Development Authority is rife.

This proposition is long overdue, especially, when the Volta Delta is in heightened focus for several development activities – oil exploration, commercial salt mining and agriculture, wind energy prospects, port development and unplanned urbanization in addition to the impacts of climate change, which jointly exerted more pressure on the vulnerability of the ecosystem of the Volta delta.

Mr Ken Kinney, Executive Director of The DI and Coordinator of Delta Alliance-Ghana Wing said the ‘Ghana-Netherlands Universities’ Volta Delta Design Project’ is looking at solutions that will feed into sustainable infrastructure and policy decision consistent with the ecosystem of the peculiar areas that will ensure sustainable development.

He said the students who are pursuing their PhD and Master’s programmes in policy, architecture, coastal engineering, water resources management, fisheries, geology and marine sciences would assist in the development of the roadmap.

Dr Peter van Veelen, Delta Alliance International Secretariat member and researcher at the Technical University of Delft, The Netherlands called for long-term integrated development strategies, community livelihood plans and conscious infrastructure development strategies to address the complex issues of the Volta delta basin adding ”We shall invoke the experiences from the Netherlands to inform the exercise in Ghana.”

Professor Kwasi Appeaning-Addo, Head, Department of Marines and Fisheries Science, University of Ghana, Legon, said re-engineering the landscape of the Volta Delta for optimal benefits to the population and the local economy was crucial.

He said estimated 5,000 houses were damaged by coastal erosion in the Keta area alone since 1960 with about 50 houses demolished by sea surges in the Fuveme area, which displaced scores between 2014-16.

Indeed, this resource is home to the largest Ramsar site in the country, Songor and the Keta Lagoon complex, the only habitat of the ‘West Africa Sitatunga,’ a rare water antelope in Ghana.

Notably, engineering solutions of constructing groins and revetment have failed to stabilize parts of the coast but this had consistently blocked access to the beaches, which is affecting traditional fishing expeditions, hence new planning architecture.

Invariably, a comprehensive and integrated delta management plan for the Volta Delta in which urban, economic development and social welfare are balanced within a secure ecosystem and integrated within the governance structures of Ghana needs prompt attention from duty-bearers.

Government, as a major stakeholder should embrace the efforts of The DI-Delta Alliance Ghana Wing and its partners to engender discussions on harnessing the full potentials of the Volta delta basin for housing, tourism, food and economic security – a well-coordinated adaptation approaches and effective monitoring scheme and expand early warning systems to protect life and property.

Again particular focus on the potential benefits of planned migration versus other adaptation choices such as the construction of dikes could unlock the potentials of the Volta delta basin and investments to champion this agenda is huge but through collaboration with development partners, private sector, civil society, knowledge institutions and communities. This action could move beyond dreams to reality with an integrated planning architecture.