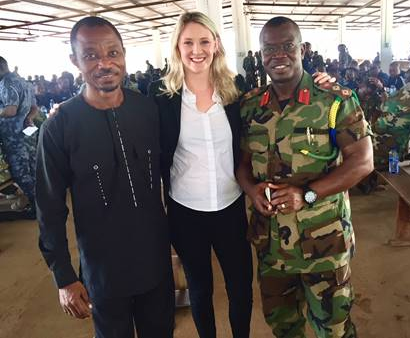 The Fund For Peace (FFP), a US based non-profit organisation into educational research, has trained 425 military and police personnel of the ‘Operation Vanguard’ on Voluntary Principles (VPs) to enhance human rights issues.

The VPs are human rights guidelines designed specifically for the extractive sector companies to ensure that security personnel embark on activities that do not infringe on people’s rights hence the training.

This was made known in a statement issued in Accra by Ms Hanna Blyth, the Programmes Manager, FFP, and copied to the Ghana News Agency on Wednesday.

The statement said the training for the personnel was held ahead of the next deployment to the regions to make their work efficient devoid of any incidents with the assistance of the Ghana Armed Forces.

It said the troupe had earlier been taken through a week long training in other subjects as well as in drills to make their work more effective, it stated.

The training sponsored by the Global Affairs Canada and Canadian High Commission, would become an ongoing module for all future pre-deployments of Operation Vanguard, the statement said.

“The FFP and WANEP over the years have been advocating hard for the integration of the VPs into the Multilateral Mining Improvement Project (MMIP) and Operation Vanguard, this sustainable training module was an important step,” it stated.

That, it said, would help prepare Operation Vanguard officers in their engagement with communities in the field, stating that this was in line with Ghanaian and international human rights standards and laws.

Operation Vanguard launched in 2017 by government was made up of security personnel deployed into mining communities to help fight against illegal mining (Galamsey).

You can only dissolve ordinance marriages after two years – Marriage Registrar

KMA vows to deal with people extorting money from traders