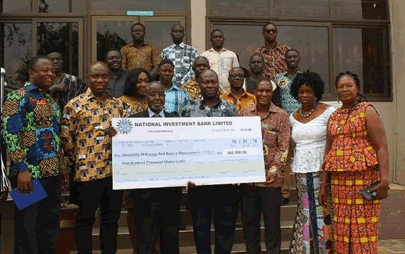 The Ghana National Petroleum Corporation (GNPC) has presented a cheque for GH¢500,000.00 to the University of Energy and Natural Resources (UENR) for the completion of the first phase of the University’s two-storey building Applications Laboratory.

The corporation presented the same amount of money to the University in September 2016 to making a total of GH¢1 million following an appeal  they made to undertake the project.

The first donation enabled the University to commence the project being executed by Amonu and Bonsu Company Limited, an Accra-Kumasi-based building construction and civil engineering firm.

The second cheque is therefore to ensure the completion and handing over of the ground floor (first phase) by the end of February 2018 at an estimated cost of GH¢868,803.00 but the value of work done so far was about GH¢700,000.00

The composition of this phase are; four laboratories with their attached offices, seminar room and additional offices, five washrooms each for male and female students and designated washrooms for staff.

Mr Yaw Kyei, a Board member of GNPC and Trustee of the GNPC Foundation, the corporate social responsibility (CSR) arm of the Corporation led a three-member team to do the presentation on behalf of the Board and Management of the Foundation on Friday in Sunyani.

Mr. Kyei said in its quest to explore for more oil and gas, the GNPC would like to have stronger collaboration with the University as the two entities have a common vision of developing the nation’s energy sector for a more economically vibrant oil and gas industry for holistic national development.

Mr. Kyei stated that aside the collaboration, the GNPC had awarded scholarships to 25 undergraduate students of the University in the 2017/2018 academic year and was also financing one lecturer undertaking a Doctor of Philosophy (PhD) programme in Petroleum and Gas Engineering at the Glasgow University, Scotland in the United Kingdom.

Professor Ambrose Kwame Tuah, the Chair of the University’s Governing Council who received the cheque said universities were becoming more expensive to manage and that burden would even be greater as application for admission would rise because of the Free Senior High School Education programme implementation by the government.

Prof. Tuah said that implied the need for more financial resources to obtain the required physical infrastructure, materials and logistics by universities to be able to meet the rising demand for admission by qualified applicants.

He therefore appealed to other corporate bodies and individual philanthropists to assist the UENR financially and materially to propel it to achieve the mandate of its establishment.

Prof. Harrison Kwame Dapaah, the Vice-Chancellor (VC) later in an interview with the Ghana News Agency (GNA) said the collaboration with GNPC started in 2015 and had been extremely helpful to the University.

He said besides other benefits, the construction of the Application Laboratory had come as a “great relief” since the burden of conveying engineering students through long distance travels to use that of the Kwame Nkrumah University of Science and Technology in Kumasi would soon be over.