Ghana is the best performer in sub-Saharan Africa in the 2017-2018 Rule of Law Index released Wednesday January 31, 2018 in Washington DC.

The Index by the World Justice Project (WJP) an independent, multidisciplinary organization working to advance the rule of law around the world, and ranks 113 countries of the world, bases its measurement of rule of law adherence in these countries on more than 110,000 household and 3,000 expert surveys.

South Africa moves a step down to 44, while Burkina Faso and Kenya made the biggest improvement in rank among the 18 countries indexed in sub-Saharan Africa. The two countries went up nine and five spots respectively in the global rankings. Burkina Faso moved from the 79th position in 2016 to 70th and Kenya moved from 100th to 95th.

On the other hand, Madagascar made the biggest drop in rank, falling eight spots – it dropped from the 90th position to 98th.

According to the WJP, there have been decline in the areas of human rights, checks on government powers, and civil and criminal justice in majority of countries worldwide, but overall, the sub-Saharan Africa region showed the most improvements in Absence of Corruption, with four countries experiencing upward trends in this factor and none showing downward trends. 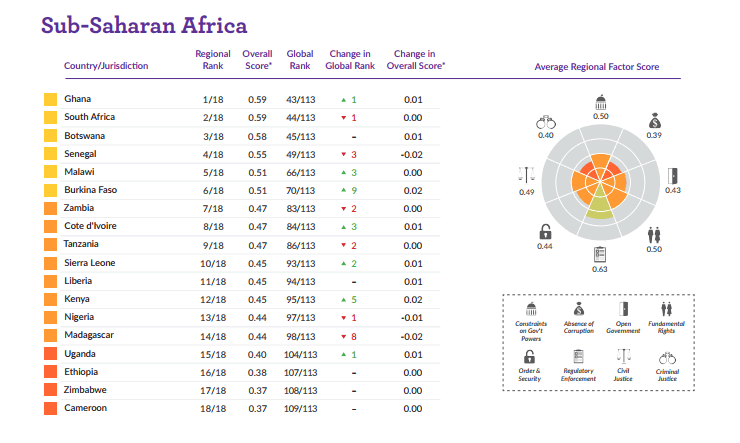 It notes also that the greatest decline was seen in Factor 4, which is Fundamental Rights. It says 71 countries dropped out of 113, which measures absence of discrimination, right to life and security, due process, freedom of expression and religion, right to privacy, freedom of association, and labor rights.

The second greatest decline was seen in Factor 1, Constraints on Government Powers, which measures the extent to which those who govern are bound by law – 64 countries dropped out of 113, it added.

Denmark at number 1, Norway in second place, and  Finland in third, are the top three overall performers in the 2017-2018 Index.

The bottom three countries are; Afghanistan at 111th, Cambodia, sitting at 112th, and Venezuela, last in the Index at 113th.

“The top three and bottom three performing countries have not changed since the 2016 Index,” the WJP pointed out.

Commenting, William H. Neukom, the founder and CEO of WJP, says, “We are witnessing a global deterioration in fundamental aspects of the rule of law. Reduced adherence to the rule of law anywhere threatens development everywhere.”

“Effective rule of law is the foundation for communities of equity, opportunity, and peace.No country has achieved a perfect realization of the rule of law. The Index is intended to be a first step in setting benchmarks, informing reforms, stimulating programs, and deepening appreciation and understanding for the foundational importance of the rule of law,” he added.

By Emmanuel K. Dogbevi
Copyright ©2018 by Creative Imaginations Publicity
All rights reserved. This report or any portion thereof may not be reproduced or used in any manner whatsoever without the express written permission of the publisher except for the use of brief quotations in reviews.