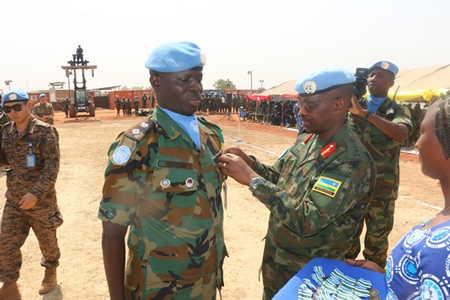 Lieutenant General Frank Mushyo Kamanzi, the Force Commander of the United Nations Mission in South Sudan (UNMISS), has commended Ghanaian peacekeepers serving with the Mission for their high sense of professionalism and dedication to duty.

He said the peacekeepers had performed creditably in their assigned tasks in Bentiu and Leer, South Sudan, in the quest to bring lasting peace to that country.

He noted that the Ghanaian Battalion (GHANBATT) had discharged its assigned tasks professionally to the admiration of both the Military and civilian members of UNMISS, adding that its efforts were an immense contribution towards the success of the UNMISS Mandate.

Lt. Gen. Kamanzi made these remarks when he awarded Peace Medals to personnel of UNMISS GHANBATT 5, during their Medal Presentation Parade held on Thursday, January 25, 2018 at the GHANBATT Headquarters in Bentiu, South Sudan.

Lt. Gen. Kamanzi, who was also the Reviewing Officer for the occasion, expressed his appreciation to the gallant officers, Men and Women of the Battalion for their hard work, dedication to duty and sacrifice over the period of their tour in South Sudan.

He noted that GHANBATT had set a high standard and dominated its area of operational responsibility whilst executing its tasks, some of which included providing security to close to 120,000 Internally Displaced Persons (IDPs) in the largest protection of civilian camps in the world, conducting short and long duration patrols, regular dynamic air patrols, as well as providing escort to UN personnel and convoys.

On the humanitarian front, Lt. Gen Kamanzi acknowledged the extremely difficult and risky situation under which GHANBATT had been operating in Leer, and commended the Battalion for the provision of security, medical care and water to over 3,200 IDPs in the Temporary Protection Areas.

He also commended GHANBATT’s act of bravery and professionalism in defending the Temporary Operating Base during a 45-minute attack by unidentified armed men on May 3, 2017.

The Reviewing Officer applauded the Ghana Armed Forces (GAF) for giving an opportunity to its ladies to contribute to the UNMISS peacekeeping operation by deploying 57 female soldiers with the Battalion.

He congratulated personnel of GHANBATT 5 for their smart turnout, the impressive drill and colourful parade and said they should proudly wear their medals as they really deserved it.

Dignitaries present included the leader of the GAF Delegation and the Chief of the Defense Staff, Lt. Gen Obed Boamah Akwa, the Commander of the Sector North, Brig Gen Albert Dawohoso, the OIC Head of Field Office, Mr Norbert Niyo Dusenga and the Host and Commanding Officer of the GHANBATT, Lt. Col. Andrews Kofi Oduah.