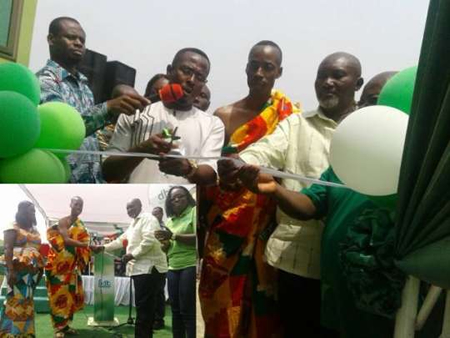 Government, on Friday, fulfilled its promise by presenting a fully-furnished three-bedroom house to the 2016 National Best Farmer, Mr Robert Bob Crentsil, at a handing-over ceremony at Gomoa-Aprah in the Gomoa East District of the Central Region.

The house, valued at GH¢ 400,000.00, was sponsored by the Agricultural Development Bank (ADB), the Lead Sponsors of the National Farmers Day, at a preferred location by the National Best Farmer.

Dr John Kofi Mensah, the Managing Director of the ADB, who handed over the keys of the house to Mr Robert Patrick Ankobiah, the Acting Chief Director of the Ministry of Food and Agriculture, said the prize package formed part of the Bank’s Corporate Social Responsibility Strategy to motivate farmers to give off their best and improve food production in the country.

He said since 2001, the Bank had donated 16 three-bedroom houses to the National Best Farmers and would continue supporting the efforts of government in ensuring food security and accelerating national development.

The Managing Director of the ADB gave the assurance that, the Bank would offer the necessary financial support to farmers and, therefore, urged the youth to venture into agriculture value chain projects since the sector had become very lucrative.

He said the Bank had established an Agriculture Value Chain Unit to offer agriculture support services and infrastructure financing to farmers, noting that, it had opened desk offices across the country for that purpose.

Dr Kofi Mensah said the Bank had set aside GH¢200 million to support government’s flagship programme “One District, One Factory”, and also serving as a major player in the implementation of the “Planting for Food and Jobs” initiative.

He noted that agricultural sector was a good place for investment and admonished Ghanaians, especially the unemployed youth to take advantage of the government policy direction to venture into agriculture.

Dr Owusu Afriyie Akoto, the Minister of Food and Agriculture, in a speech read on his behalf, expressed gratitude to the Board and Management of the ADB for fulfilling their promise by donating the house and contributing towards the socio-economic advancement of the nation.

He said the Bank had played a leadership role in the agricultural sector and noted that, government would strive to transform the country from a middle-income economy to a modern one.

Dr Afriyie Akoto said agriculture was the mainstay of the country’s economy, therefore, government had instituted special interventions such as the Planting for Food and Jobs (PFJ), to exploit the potentials of agriculture in order to enhance food security, alleviate poverty and create wealth for all.

The Minister said the government was exploring various strategies in the PFJ programme to prevent post-harvest losses, enhancing the application of technology and agriculture extension services to improve food security and geared towards achieving the industrialisation agenda.

He said the PFJ programme would promote agribusiness through commodity value chain development, which would serve as catalyst for industrial transformation.

Dr Afriyie Akoto entreated Ghanaians to change their mentality about agriculture as job for the rural dwellers, saying “Agriculture has inherent and comparative advantage which provides enormous advantage for entrepreneurship, revenue generation and employment”.

In his acceptance speech, the 43-year-old Robert Crentsil, the 2016 National Best Farmer, who hailed from Ajumako Ochieso in the Ajumako-Enyan-Essiam District of the Central Region, expressed appreciation to the ADB and Government for redeeming their pledge.

Mr Crentsil said farming had been his childhood dream and a profession he cherished very much and thus, urged the youth to venture into agriculture, saying; “They would never regret doing so”.

He pledged to offer his expertise and experiences in farming to his colleague farmers and the youth in particular, to succeed in the field of agriculture.

The event attracted high profile personalities in the Region, including the Regional Minister Mr Kwamena Duncan, the District Chief Executive of Gomoa East, Mr Benjamin Otoo, the Chief of Gomoa-Aprah, Nana Kofi Ansah, the spouse and family members of the 2016 National Best Farmer, as well as officials from MOFA and ADB.