Government to re-register all vehicles

January 25, 2018 General News Comments Off on Government to re-register all vehicles 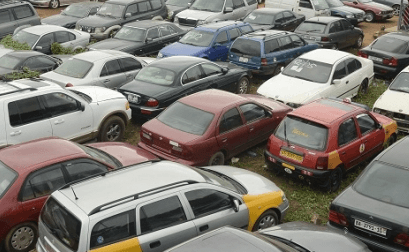 The Government will soon commence the re-registration of all vehicles plying in the country in line with the provisions of the Road Traffic Regulations 2012, and for proper inventory.

The move, which would be done by the Ministry of Transport in collaboration with the Driver and Vehicle Licensing Authority (DVLA), would enable Ghana to obtain a comprehensive inventory of vehicles and to ensure that the right fuels were sourced to fuel them and to save the environment from being polluted by vehicular emissions.

The re-registration exercise had become necessary because, currently in the country, there are no accurate inventory on the kind of vehicles plying our roads in spite of the fact that road transport continued to be the dominant mode of transportation, accounting for over 95 per cent of all domestic transport mode.

Mr Kwaku Ofori Asiamah, Minister of Transport who announced this in Accra in a speech read on his behalf, said the Ministry was collaborating with other sector Ministries including; the Ministry of Environment, Science, Technology and Innovation, as well as the Ministry of Energy and other agencies.

It would ensure that the transport sector becomes efficient, sustainable, and environmentally friendly.

Mr Asiamah was speaking at a day’s workshop on Vehicle Inventory and Policy Options for Fuel Economy Standards in Ghana.

The Workshop organised by the Environmental Protection Agency (EPA) in collaboration with the UN Environment, and other local partners at Amasaman, near Accra, was meant to disseminate the Vehicle Inventory report and to share Results of Policy Strategies for implementing Fuel Economy Standards in Ghana.

Fuel Economy is the relationship between the distance travelled and the amount of fuel consumed and that was dependant on a number of factors including; the engine size, traffic conditions and the nature of the fuel, Mr Asiamah explained.

He said currently, Ghana had no specific fuel economy policy or regulations, but there were few policies that related to fuel economy which included; import taxation, vehicle valuation, fuel quality, and over-aged penalty among others.

He said it was worrying that current fiscal regime and customs directive made it cheaper to import used vehicles than new and efficient ones, while the less quality of fuels in the country do not also support the introduction of a more efficient vehicles into the Ghanaian market.

“These are issues that should be further considered in the development of the policy options so that we are able to come out with a document that is workable and will yield results”, he told the stakeholders attending the workshop.

He urged the participants to consider options that were available to reform the custom directives to attract the import of energy efficient and clean vehicles, such as electric and hybrid vehicles, and also discuss what fiscal measures could be employed to incentivised efficient technologies and discourage inefficient ones.

He expressed hope that the outcome of the workshop would be very informative to the on-going review of the National Transport Policy, which was in its finalisation stage.

Mr Peter Abum Sarkodie, Executive Director of EPA said one of the key functions of the Agency was to prescribe standards and guidelines relating to the pollution of air, water, land and any other forms of environmental pollution including; the discharge of waste and the control of toxic substances in the environment.

He said currently, EPA has 16 monitoring stations in Accra and out of that number, 10 were located along the major road routes in Accra.

He announced that data gathered so far from the roadside air monitoring stations showed high levels of particulates (Air pollution) as compared with the other sites located in residential, commercial and industrial areas.

He said the Agency was therefore, collaborating with all stakeholders to increase the monitoring of the air quality and vehicular emissions in the whole country.

He commended the UN Environment for its support last year that helped Ghana to develop a roadmap to implement soot-free (cleaner) bus standards in Accra for the consideration of the government.

Mr Sarkodie noted that the rationale behind the global strategy on sustainable transport was to assess fuel efficiency of vehicle, prescribe strategies to help stabilise greenhouse gas emissions from the global light duty vehicles fleet and to reduce the negative environmental consequences.

He therefore, thanked the UN Environment and other sector Ministries for the collaborative support to EPA to ensure that Ghana had a more sustainable Transport emissions reduction.

Mr David Alexandra Rubia, Programmes Manager of Air Quality and Monitoring Unit at the UN Environment, said the need to address air quality was critical because it directly impacted on the health of people and also contributed to the impact of the climate change. “We should clean up our air for better air and better life”.

Mr Rubia said most of the countries in Asia including; China and India, as well as in South Africa, North America and South had designed their polices of fuel efficiency already while others in Africa were in the process of designing their policies.

He announced that the International Energy Agency had mandated countries to at least ensure that 20 per cent of all road vehicles were electric-powered by 2030, and that called for critical actions to be taken by countries towards that achievement to help contribute to efforts of fighting global emissions.

He therefore, commended Ghana for the steps it was taken to ensure the reduction of emissions and that its air quality was clean and safe.

Mr Emmanuel Appoh, Head of Environmental Quality Unit of EPA and National Coordinator of the Programme said the dissemination workshop was to share the results of the Policy Strategies for the Fuel Economy and to gather inputs from the stakeholders in designing the Policy for the Fuel Economy Standards, which was very important for Ghana to have.