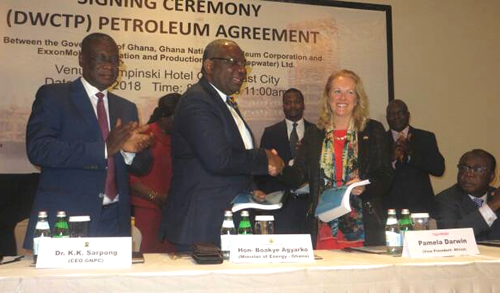 The Ghana government has been asked to make public the recent contract it signed with ExxonMobil to enable Ghanaians determine the benefits and effects .

Speaking to the New Crusading Guide in an exclusive interview, Dr Steve Manteaw, a policy analyst with the Integrated Social Development Centre (ISODEC) indicated that in signing the contract, the default position of the law in respect of licensing was not followed. Again, he disclosed that the notice of negotiation did not provide convincing basis for the direct negotiation. According to him, direct negotiations were relatively opaque and that the contract should have gone through competitive tendering. Besides, since Ghana’s regulatory institutions are not matured enough to handle big players and their capacity should have been built first before entering into such direct negotiations.

“Under PNDCL 84 acreages were allocated through ‘Open Door, Negotiated deal making’ but in the current contract, the Process was not open”.  He said issues of sweat equity and how to treat it emerged during the negotiation period and these remained unresolved

Dr Manteaw said Act 919, 2016 moved the country away from direct negotiations to open competitive bidding as the default process for allocating petroleum rights but government chose to do direct negotiation; “Open Competitive Bidding helps to prevent abuse of discretion; it also helps to secure optimum contractual outcome for the country”

He said  the law gives the minister the discretion not to enter into a Petroleum Agreement after a bidding round; besides, Section .10 (9) grants discretion to the Minister (in consultation with PC) to enter into direct negotiations. He said such approach represents the most efficient manner to achieve optimum returns or outcome.

According to Dr Manteaw, discretion however, must be exercised on stated reasons. In the case of ExxonMobil and the government of Ghana, he said there was no clarity on the details as to how those reasons were  made public.

Issues with the ‘Notice of Direct Negotiation’

According to the Minister of Energy, Boakye Agyarko negotiations began before Act 919 was passed.

“However this position is not supported by the chronology of events. Act 919 was passed in August 2016; Notice of Direct Negotiations was placed in the newspapers in October 2017.  Again, the notice makes reference to an MoU signed on April 30, 2015 between the parties.  The MoU under reference committed the parties to negotiate an agreement over a period of seven months (Exclusivity period). We see here, a clear attempt to create the impression that the negotiations pre-date Act 919 but the MoU technically had lapsed;  Granted that the MoU indeed pre-dated the Act, then there would have been no need to serve notice, but to continue with negotiations, or at least the notice should say negotiations were continuing,” he clarified .

“The notice touts the expertise, track record, technological acumen, financial capacity of ExxonMobil, but these do not necessarily suggest that Ghana will get the best offer from the company – it is only when they are pitched against similar size companies such as BP, Shell, Aker, Chinese giants etc., all of which have capacity to work in ultra-deep waters, that they will offer greater value. A major risk associated with Direct Negotiations is that, it gives room for elite capture – e.g. Not clear how the fourth entity has been /or would be selected,” he queried.

The Minister for Energy described the terms of the agreement as one of the best, and “based on lessons from our 10 years’ experience since Ghana’s first major discovery, The first time the public has been invited to witness the signing of an agreement.”

The agreement was reached through direct negotiations. Notice of the negotiations was published in the newspapers. Parliament is expected to ratify the deal before work could begin.

A fourth party, an indigenous Ghanaian entity is supposed to sign its portion before the agreement can be sent to Parliament.

What does the deal mean for Ghana?

Upstream petroleum activities are capital intensive – more so for ultra-deep waters. Competition for investment into the sector is therefore keen, and even keener in Africa. Key determinants have always been the maturity of geological basins, availability of geological data, track record of exploration successes, skilled labour, level of infrastructure development, and fiscal terms.

It therefore counts for much if one is able to step ahead of competition. The ExxonMobil deal like many other types of investments, will bring jobs, taxes, more crude, maybe more investments, and maybe economic development.

“We are here talking about a company, whose annual turnover is several times the size of Ghana’s GDP. A company that has the capacity to hire the brightest and best of lawyers, a company that can buy political patronage in a country, whose political party funding is largely dependent on private sector funding. Even though our electoral laws prohibit funding from foreigners, we know that in practice monies have come from foreigners and even foreign governments to support political campaigning. The risk of big players overriding our institutions is compounded even further by the fact that the development of general petroleum regulations are still incomplete. Challenges we’ve had with Kosmos over proprietary data, spill of light toxic mud, right of first refusal etc., should serve as basis for caution,” Dr Manteaw explained further .

How can the country mitigate the perceived risks?

There must be continuous strengthening of the regulator.

There is need to move towards a convergence of regulatory institutions, Parliamentary vigilance and effective oversight are required.

Citizens’ vigilance and pro-activeness – including public interest litigation, citizens’ access to contracts very key, but the law is not categorical on it. Section 56 (1) and (2) require the establishment and maintenance of a publicly accessible Register of Petroleum Agreements, licenses, and permits. It is not clear what the format of disclosure will be, and if fees would be charged for accessing the register. Regulations may clarify whether public access to the Register, includes access to the text of the contracts.

Meanwhile, former Deputy Minister of Energy, John Jinapor, has assured Ghanaians that parliament will work hard to scrutinize the contract between the government of Ghana and ExxonMobil when it is presented for approval. He said the parliamentary committee on Energy will do justice to the deal and apply all the sections of the law appropriately in the interest of the state before the contract would be approved or otherwise.

The Minister of Energy, Boakye-Agyarko however, says the move will also increase government’s revenue from the sector to propel economic growth and transformation.

ExxonMobil’s investment in the oil sector becomes the first major one in Ghana following the landmark ruling by ITLOS in the maritime border dispute between Ghana and Ivory Coast, in September last year.

The apparent victory by Ghana gives the country an appreciable reputation among the global oil giants.

The Energy Minister adds that the move is set to trigger further investments in the short to medium term.

“ExxonMobil is coming in with the highest standard of safety, financial accounting and all that we need to get done as a country…we have received a lot of expression of interests from other major players; the BP, Shell, Chevron, among others. All of them are now coming to operate in Ghana,” he stated.

On his part, the CEO of the Ghana National Petroleum Corporation (GNPC), Dr. K.K. Sarpong, stressed the enforcement of local content policies.

In his view, the plan will give Ghanaians access to opportunities in ExxonMobil’s operations where necessary.

“In terms of local content policies, the laws have been strengthened the Petroleum Commission is at the forefront of enforcing the laws and we at GNPC have the sustainability and localization department which tries to make sure that we bring our partner’s attention to the mode of operation so that we take advantage to get benefits from our local people both corporate and individuals.”

ExxonMobil joins other operators in Ghana’s petroleum upstream sector including, Tullow, Kosmos, ENI, among others.