Drama unfolds as man claims to have found cure for HIV

January 24, 2018 General News Comments Off on Drama unfolds as man claims to have found cure for HIV 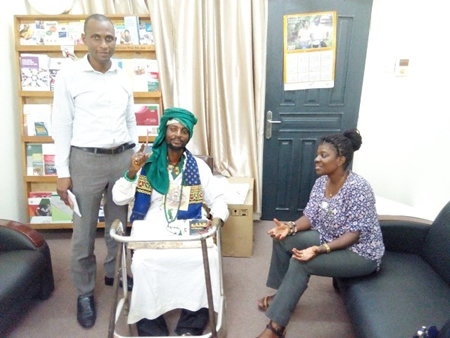 A 37 year old herbalist, Mallam Abdul Razak Mohamed, resident at Suhum in the Eastern Region, claims to have found cure for HIV and AIDS to end the pain and suffering of people infected with it.

Mallam Mohamed, who walked into the Eastern Region office of the Technical Support Unit (TSU) of the Ghana AIDS Commission (GAC) on Wednesday morning to disclose his claim of cure, said God had revealed to him roots of coconut tree and a stem of ‘ogyama’  tree species to cure HIV.

However, Drama unfolded when this man who claims to be a muslim and an ardent believer of Jesus Christ, said the mode of contracting HIV was through mosquito and dog bites, adultery and spiritual curses.

He said through the revelation, God showed him that HIV was a spiritual infection and that it only became physical when an infected person started to show signs and symptoms of the disease which  became fully blown AIDS.

In order to prove the efficacy of the medication claimed to be from God, he threw a challenge to the GAC to give him three HIV patients to test the medicines on them, adding that “this is to raise the image of Ghana as the country to have found cure for this deadly disease.”

Mallam Mohamed therefore appealed to the GAC to accept his claim because it was a revelation from God and a remedy to end the suffering of the world, adding that he was ready to accept any terms and protocols provided his claim would be accepted.

The Regional Coordinator of the GAC, Ms Golda Asante, used the opportunity to educate him on the basic knowledge of HIV and AIDS, stressing that HIV was not a spiritual curse or acquired through mosquito and dog bites.

She said while the GAC was ready to analyse and assess every claim of cure, the Anti-retroviral (ART) was the World Health Organisation (WHO) recommended drug for infected persons and, therefore, urged the public to adhere to that.