Hohoe and Buem youth clash at hearing on new region 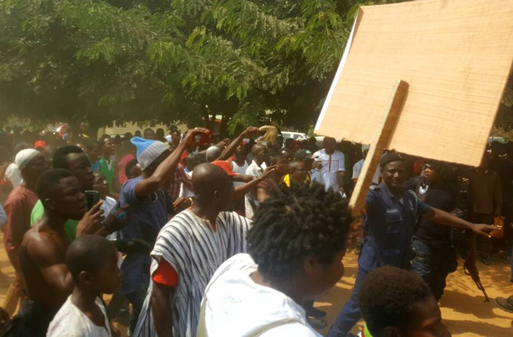 Some youth of Hohoe and Buem on Saturday clashed at the Nsuta Buem Catholic Secretariat over the creation of a proposed Oti Region out of the Volta Region.

The youth from Hohoe who accompanied Togbe Gabusu VII, Paramount Chief of Gbi Traditional area to the public hearing on the creation of the new region stormed the event venue with placards some of which read “no racial tatoos”, “Hohoe disintegrated” which angered the youth of Buem resulting in the clashes.

The swift intervention of armed military and policemen averted a blood bath.
The Kpando Municipal Coordinating Director and two men from Hohoe were whisked away by the police whilst the youth of Buem hurled stones at the police vehicle.

Some youth from Buem told the Ghana News Agency that they would resist all attempts at marring the process of creating the proposed region.

Some young people were seen brandishing knifes as the police and military tried to contain the scuffle and calm the atmosphere for the exercise to proceed.

The hearing at Jasikan was the last in the Volta Region and attracted groups and individuals from Kadjebi, Biakoye, Jasikan and some traditional areas in the Hohoe Municipality.

Mr Maxwell Blagodzi, Deputy Volta Regional Minister appealed for calm and advised leaders of both sides not to compromise the peaceful process.