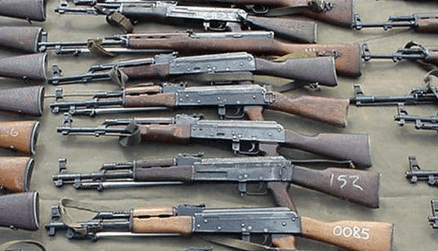 Mr Salifu Saeed, Northern Regional Minister, has expressed dissatisfaction at the rate of unlawful trade in firearms and ammunitions to groups and individuals making it difficult to solve conflicts in the Region.

He said unlawful trading in firearms and ammunitions must not be seen as a business opportunity since it constituted the major factor that inspired individuals to take the law into their own hands to commit unpardonable crimes.

Mr Saeed expressed the dissatisfaction when he visited the Kolampor-Kafaba community in the East Gonja Ditrict with members of the Northern Regional Security Council (REGSEC) to acquaint himself with the security situation after some skirmishes last week.

On December 6, this year, an unidentified group of people attacked and raided the Kalompor-Kafaba community at around 1900 hours, burning houses and firing sporadically leading to the death of six persons with nine others sustaining various degree of injuries.

The raid, according to sources, was motivated by an act of chieftaincy dispute between the Kalompor-Kafaba and the Kafaba communities leading to the destruction of lives and property, where many people fled the community.

Mr Saeed assured government’s determination to ensure that law and order prevailed in the country devoid of conflicts that would undermine peaceful co-existence to retard development.

He indicated that individuals who would take the law into their own hands to undermine the peaceful co-existence to destabilize security in the country especially in the region would be dealt with by the laws of the country.

The Minister commended members of the REGSEC and District Security Committee (DISEC) and other security agencies in the Region for their pro-activeness to security situations.

Deputy Commissioner of Police (DCOP) Mr Patrick Sarpong, Northern Regional Police Commander, urged members of the Kolampor-Kafaba community to remain calm and assist the police with information that would lead to the arrest of the perpetrators.