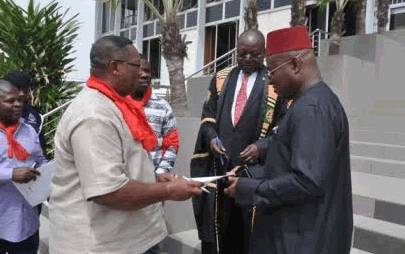 The Ghana Mineworkers Union has petitioned parliament over attempts by GoldFields Ghana to lay off over 1,700 workers and re-employ them on a contract basis.

According to the Union, the move by the company amounted to unfair labour practice.

Mr Prince William Ankrah, General Secretary of the Union, who presented the petition, indicated that the basis for the company’s actions was unfounded and could result in the loss of revenue for many of the workers.

He said contrary to claims by Goldfields that the Limited Life of Mine (LoM) stands at  5-6 years and therefore cannot purchase new mining fleet, considering the short payback periods is totally misleading and runs counter to its own official records.

He said according to Golgfields own official website, described the Tarkwa Gold Mine as a “World-class, low-cost surface mine with a 6.1-million-ounce mineral reserve and 15-year life that remain strongly geared to the gold price, and strong potential for leveraging resources ounce conversation and driving larger pits with high gold prices”

He said Goldfields has unsuccessfully tried to create the impression that as a result of its aging fleet, to remain in business, it needs to replace all its fleet en bloc, a situation the workers find extremely unrealistic.

Mr Ankrah also stated that “Goldfields intends having its own way. We are a law-abiding union, we’ve had stability in our industry for many years. We deem it expedient to make sure that we present the petition to the honourable House so they understand the dynamics and seeing how best to address the issue…We are demanding that Goldfields cannot do what they intend doing by subjecting our members to a mining contract. Members will lose revenue streams,” he said.

Mr Osei Kyei-Mensah-Bonsu, the Majority Leader who received the petition on behalf of the Speaker of Parliament, Prof Aaron Mike Oquaye, said members of Parliament would study the petition and take the necessary action to ensure that the issue is amicably resolved.

Parliament worried over the state of Ghana News Agency