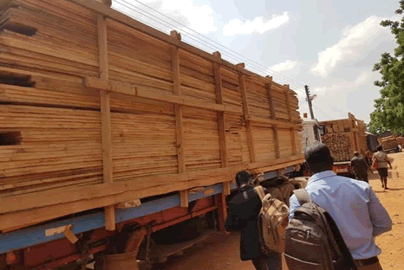 Officials of the Forestry Commission have intensified their fight against illegal logging in efforts to stem the tide of deforestation and ensure sustainable forest resource exploitation.

In this direction, the Commission has impounded about 19 trucks loaded with illegally sawn timber, including the banned Rosewood specie over the past week.

Deputy Chief Executive Officer of Forestry Commission, Mr John Allotey who briefed journalists at the Forestry Commission depot where the trucks are being kept, said the Commission would carry the fight to the illegal operators in the forests to nip such negative activities in the bud.

“Illegal loggers have stepped up their game across the country in recent months and through the vigilance of our personnel, we have impounded these 19 trucks loaded with chain-sawn lumber and rosewood being transported from various parts of the country,” Mr Allotey said.

He said the Forestry Commission would take every step necessary to fight the crime and prosecute the perpetrators and cautioned the public that any illegally sawn lumber and rosewood being transported along the roads in the country would be confiscated together with the trucks carrying them.

Mr Allotey said the trucks, which were impounded in the Eastern and Volta regions, would be taken to court and their owners prosecuted.

“We send this message to the truck owners to also be careful in renting their trucks to people who are involved in illegal logging because when we arrest the trucks we are going to impound the lumber and the truck,” he said.

He warned that the Commission would punish any official of the Commission found compromising in illegal logging activities in line with laid down procedure.

Mr Allotey said the time given to people who have stocks of rosewood would elapse at the end of the year, but warned that the Commission officials would confiscate trucks carrying processed rosewood without the necessary license and documentation on the road and have the owners prosecuted.