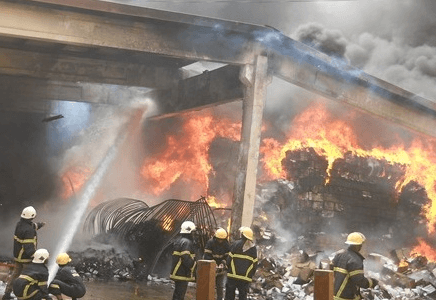 ACFO Owusu-Adjei made this known when addressing traders and the general public at the Nana Bosomah market, also known as Wednesday market in Sunyani.

Held under the theme: “Fire Safety a Shared Responsibility”, the event was to sensitise them on fire safety measures as part of a fire prevention campaign before the onset of the dry season.

The Regional Fire Commander urged the public to warn their children against playing with matches or going near fires in the dry season.

ACFO Owusu-Adjei said fire prevention is a shared responsibility and if the public would obey fire regulations, the region could record zero fire incidents in the coming years.

He advised farmers to create farm belts around their farms to prevent fire from destroying their investments and also entreated them to engage fire volunteers to direct them when preparing their lands for sowing in the dry season.

ACFO Owusu-Adjei said the PNDC law 229 mandates the GNFS and the Metropolitan, Municipal and District Assemblies to sanction people who intentionally set fire to cause destruction of lives and properties and warned that anybody caught in the act would not be spared.

He said his outfit has trained many fire volunteers to assist in fire fighting in the region, especially in the dry season and would also intensify their campaign on the airwaves and at public places to educate the people.