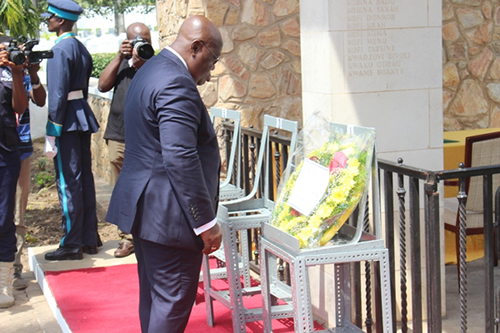 The Remembrance Day, which falls on November 11 each year is set aside to remember Ghanaian Veterans and others who lost their lives in the World War 1 and 2.

Remembrance Day known as Poppy Day is observed in Commonwealth of Nations member states since the end of the First World War to remember the members of their Armed Forces who died in their line of duty.

The Armistice, which ended World War 1, became effective at 1100 hours of November 11, 1918. After World War II the Armistice Day was renamed Remembrance Day to remember those who died in both world wars and instituted as a National Day of Remembrance.

The solemn occasion attracted people from the various sections of society including; members of the Diplomatic Corps, Traditional Rulers, Service Commanders and Ministers of State.

At 10:56 hours there was the Call to Remembrance and the Sounding of the Farewell Call.

This was followed by blowing of the Siren at 1100 hours, the reading of the Binyon Verses, the sounding of the last post, a two minutes silence and the reveille.

President Akufo-Addo, who was the Reviewing Commander, laid the first wreath on behalf of the Government and the people of Ghana.

Nii Okwei Kinka Dowuona VI, the Paramount Chief of Osu and President of the Greater Accra Region House of Chiefs, laid the sixth wreath on behalf of all traditional rulers in Ghana.

President Akuffo Addo and other invited dignitaries later signed a remembrance book at the memorial park.