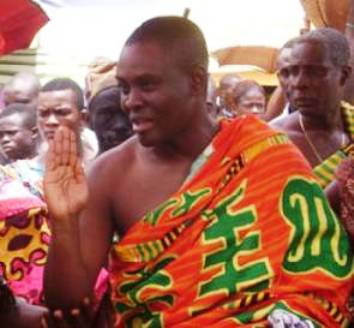 Osagyefo Oseadeyo Agyemang Badu II, the Paramount Chief of Dormaa Traditional Area has said each player of Aduana Stars, would be given a plot of land in Dormaa for winning the 2016/17 Ghana Premier League(GPL).

In addition, the entire team has been given GH¢100, 000.00 for their historic feat.
Some members of the technical staff would also receive a plot of land each, while two plots of land each would be allocated to the head coach, Yusif Abubakar, and the Chief Executive Officer of the Club, Mr Albert Commey.

Osagyefo Oseadeyo Agyemang Badu II, made the announcement at a dinner organised at Abanpedease in Dormaa Ahenkro in honour of the playing body, technical staff and management of Aduana Stars for emerging winners of the GPL.

The dinner was attended by some chiefs drawn from parts of the Brong Ahafo Region, the media, District Chief Executives, Heads of Departments and some executives of GFA, GHALCA and the PLB.

The players, technical staff and management would freely choose part of the Dormaa lands (Abesim, Bomaa, Chiraa and Dormaa enclave) the allocation of plot/s of land should be made for them.

He commended the players, technical staff, and management of Aduana Stars for their hard work and appealed to let the success spur them to greater heights to achieve honours in the CAF Champions League next year to raise the image of Dormaa, Brong – Ahafo Region and Ghana as a whole.

“There is a price tag of $550,000.00 for the winner in the CAF Champions League competition. This is what I want to encourage you to focus and do well. Show that Aduana are worthy champion,” he added.

Osagyefo Oseadeyo Agyemang Badu II noted that, the feat was achievable only if they would take their training seriously and remained discipline.

“You must take instructions from your coaches and stay away from excessive drinking and womanising.

“The Aduana family loves football but we believe in attaining success through hard work and not by dubious or fraudulent means. A lot of economic gains stands to made for Dormaa if football business is taken seriously as it remains one of the surest ways the area’s name can be projected”, he stated.

The Chief promised to give each player 200 bags of cement and 2000 pieces of blocks when they qualify into the money zone of the CAF Champions League next year.

“Our motive is, if you play Aduana Stars for three years, we want you to have at least a plot of land to build a house you can boast of and a good story to tell after you have left the team,” he added.

Osagyefo Oseadeyo Agyemang Badu II promised to register all the players on the National Health Insurance Scheme at his own cost to take care of their injuries and other major cases.
He thanked Aduana Supporters Union as well as other partners for contributing to the success of the team.

The Chief appealed for more support to enable him carry out works to upgrade the Nana Agyemang Badu I Sports Stadium and put it in good condition to host visiting teams taking part in the CAF Champions League competition.

Individuals, organisations and chiefs offered various sums of money in cash and in kind to support work to rehabilitate the Stadium.

COP23 opens in Bonn to fast track implementation of goals