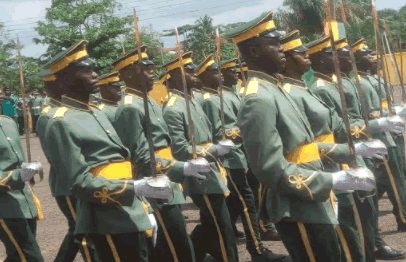 President Nana Addo Dankwa Akufo-Addo on Wednesday commissioned 54 Officer Cadets into the Ghana Immigration Service (GIS) with a call on them to safeguard the national sovereignty, territorial integrity and the peaceful development of the country.

Whilst congratulating them on their achievement, the President urged them to maintain high levels of discipline and strive not to compromise on their professional ethics.

He said diligence, integrity and honesty must be their watch word to safeguard the nation.

“As the Principal Service of our entry point, the Immigration Service is critical to the security of our borders and in the prevention of Cross border and transnational crime. It is indeed at the forefront of regional effort to combat terrorism,” he said.

The parade, which is the 9th Batch of Officer Cadets to pass out, was made up of 34 males and 20 females.

It was held at the Vigilance Square of the GIS Academy and Training School at Assin Fosu in the Central Region.

The 54 Officer Cadets were admitted into the Academy on December 28, 2016 and passed through 10 months of intensive training, studying courses such as: Terrorism and Transnational Organised Crimes, Border Patrol Management, National Security and Intelligence, Travel Documents Management, amongst others.

This is the maiden graduation parade of the GIS reviewed by the President.

He said Ghana has renewed friendship with ECOWAS member states to explore areas of cooperation.

President Akufo Addo said government was keen on gradually ensuring that all borders of the country are operational 24 hours each day.

This according to him would give true meaning to the Economic Community of West African States (ECOWAS) protocol of free movement of goods and persons and promote the progress and prosperity of Ghanaians.

“We started this in June and now the Aflao border has been running for 24 hours and same has been extended to Akamu and Sege, in due course, Elubo, Sampa, Kojokrom and the rest will follow.

“We are committed to the realisation of all our campaign promises. When I promise, I deliver,” he added.

The President said government was aware of the possible security threat that might come with the initiative and assured Ghanaians that, the country’s security was on high alert and would not tolerate any illegal transactions on the borders.

He said “I wish to assure Ghanaians that our security agencies are coordinating effectively with our neighbours to keep our respective countries safe.”

He also urged Ghanaians to be vigilant and report any suspicious activities of people in their communities.

President Akufo Addo said government was aware of the logistical challenges confronting the GIS and the undue strain on the GIS in its efforts to providing quality training.

He gave the assurance that his administration would provide modern and strategic equipment for the GIS, as well as offering competitive remuneration to enable the service to attract the best personnel.

He received the Sword of Honour, Plaque and a citation.