President inaugurates Commission of Enquiry for creation of regions 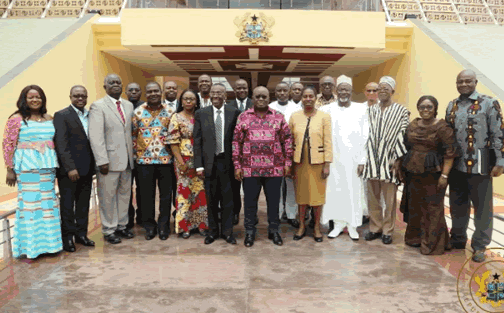 President Nana Addo Dankwa Akufo-Addo on Thursday inaugurated a nine-member Commission of Enquiry to examine the petitions for the creation of new regions and make recommendations to government to that effect.

The Commission, constituted under Article 5 of the 1992 Constitution, will inquire into the need and demands for the creation of new regions out of the Western, Brong Ahafo, Northern and Volta Regions. It is expected to furnish the President with its recommendation within six months.

The rest are Mr Robert Ajene, a retired Director of Education; Dr David Wellington Essaw, a senior research fellow of the University of Cape Coast; Prof. George Owusu, Director for the Centre for Urban Management Studies of the University of Ghana and Ms. Josephine Hughes, a legal practitioner.

At the inaugural ceremony at the Flagstaff House in Accra, President Akufo-Addo tasked the Commission to execute their constitutional duty without fear or favour.

He said in the event that the Commission’s consultation with the people proved that there was substantial demand for the creation of new regions, he would refer such recommendations to the Electoral Commission for a referendum to be conducted in those areas.

President Akufo-Addo was emphatic that not until the work of the Commission was completed, no one can claim any name or boundary as a new region.

He stated unequivocally that there had not been any pre-determined regional boundaries nor specific names given to any region to be created, neither had the government determined where to site regional capitals, urging Ghanaians to disregard any information to that effect because that was in the remit of the Commission.

President Akufo-Addo on June 26, 2017, referred the petitions from persons and organisations in the Western, Volta, Brong Ahafo and Northern Regions to the Council of State for advice.

The Council of State, after going through the petitions, subsequently advised the President on August 15, 2017, that there was need and substantial demand for the creation of new regions, thus necessitating the President to begin the process of creating new regions by appointing the Commission of Inquiry.

The Commission’s Terms of Reference, set out in paragraph 4 of C.I. 105: enjoins it to inquire, pursuant to the petitions, into the need and substantial demand for the creation of new regions and, thereby, the alteration of Western Region, Brong Ahafo Region, Northern Region and Volta Region.