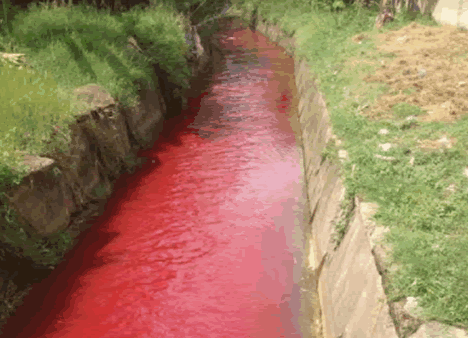 The Environmental Protection Agency (EPA) has demystified the colorization of the Nsuakwao River, which led to anxiety fueled wild speculations among the people.

Mr. Felix Addo-Okyire, Director of the Agency, said a red dye had washed directly into the river from an abandoned tie and dye factory behind the Oti-Boateng Senior High School (SHS) and that had caused the color of the water to change.

He added that claims about it being a sign of anger by some gods were completely false and should be ignored.

Mr. Addo-Okyireh, speaking to journalists in Koforidua, said what happened had highlighted the need to ensure proper disposal of chemicals.

He indicated that sample of the dye had been sent for laboratory analysis to determine its chemical composition.

He cautioned the people to stop dumping refuse and chemical substances into water bodies.

Doing these, he said, was criminal and offenders would be made to face appropriate punishment.