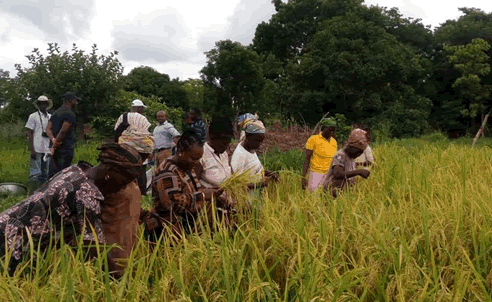 The US Agency for International Development, Ghana Mission (USAID-Ghana) is providing new technologies and improved seeds to boost rice production to promote food security and incomes in Upper West Region.

The UDP application, involves placing urea briquettes at a depth of seven and 10 cm between four rice plants seven to 14 days after transplanting to improve nitrogen fertilization in irrigation rice systems.

The technology helps to reduce nitrogen losses through run-off, and leaching volatilisation and enhances the availability of nitrogen for the crops.

The farmers are now reaping 40 bags of rice per an acre as compared to three bags using the indigenous broadcasting system.

It focuses on Ghana’s Feed the Future (FTF) intervention zone covering the Savannah ecological zones of Northern, Upper East and Upper West Regions with the International Fertilizer Development Centre (IFDC) being the lead implementor of the ATT project.

The interventions also allowed more rice to be planted and made weeding and harvesting easier and faster as well as helping to reduce cost and promote maximum utilisation of fertilizer than the traditional broadcasting system.

A plant could develop about 25 to 30 tillers as compared to the traditional method of broadcasting, which produced about 14 tillers.

At Daffiama in the Daffiama-Bussie-Issa District, on a “Brown Field Day”, literally meant a harvesting day, beneficiary farmers comprising 37 males and 66 females who cultivated 15 acres of rice, said the project encourages double cropping as it raises incomes and ensuring food security among family members.

“When we were planting the seedlings, they were looking miserable and we were not happy, but we are satisfied today of the good yields”, the farmers said.

They applauded the project but expressed disappointment at the rate at which pigs and other domestic animals were destroying the rice fields.

The farmers appealed to traditional authorities and the district assembly to enact bylaws to stop the practice where animals were left to stray.

They also pleaded with traditional authorities to ensure that farming activities along the dam catchment area was stopped to save it from siltation, while calling on the Ghana Irrigation Development Authority to repair the broken canals to allow more water flow into the field.

“Dry season rice cultivation used not to be the practice, however with the implementation of the project, “we are now hooting at hunger”, the farmers said.

He said Ghana is faced with deficit in rice production and was spending millions of dollars to import rice, explaining that the project had the potential of reducing rice importation.

The project would be linking and providing markets for farmers to help promote comparative marketing among buyers and millers to purchase the products.

He announced that the project under its “The Last Mile Approach” policy has provided 22 Seed Vans across the Northern, Upper West and Upper East Regions to make seeds and inputs available to farmers in the communities who  in many situations, found it difficult to have access to quality seeds.

Dr Mullins urged the Media to help sensitise farmers about the availability of improved seeds and inputs to encourage more farmers to take advantage of them to increase rice production.

He appealed to the farmers to impart the technology to other farmers in the communities to help boost rice production, while commending the project staff for the hard work and the yields on the field.

Dr Boubakary Cisse, Rice Seed Expert, USAID Seed Scaling Project said the ATT was promoting the cultivation of AfricaRice in the three regions of the North and the hitherto small scale vegetable farmers at Daffiama and Sankana who were participating in the project could now “eat three square meals a day with their families”.

Farmers are realising 40 bags of rice per acre as against three bags using traditional rice seeds and farming methods.

Besides, the use of traditional rice seeds is associated with low yields while the farming methods, harvesting and thrashing are also difficult for farmers to cope with, he said.

He said the project was collaborating with other Non-Governmental Organisations to help in the provision of thrashers and harvesters among others to assist farmers to lessen labour and time while promoting quality and adding value to products.

He advised farmers to continue to use quality seeds and produce more to ensure food security in the family.

NGO calls for a bill to outlaw witch camps

Ghana’s marine fish stock at the verge of collapse due to over-exploitation – Prof. Akpalu