May 23, 2017 Africa/International Comments Off on Africa is top priority for India’s foreign and economic policy – Modi 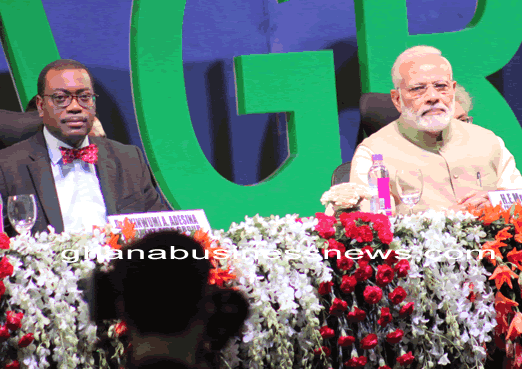 The India Exim Bank has extended lines of credit to 44 African countries to the tune of nearly $8 billion, the Prime Minister Narendra Modi has said.

Speaking at the opening of the 52nd Annual Meetings of the African Development Bank (AfDB)  in Ahmedabad, India, Tuesday May 23, 2017, he said Africa is top priority for India’s foreign and economic policy.

Prime Minister Modi, recounted the long history and relationship between India and Africa, pointing out that there is a good Indian population living in most African countries. He also said there is not a single African country which has not been visited by an Indian Cabinet member, adding, “India’s partnership with Africa is based on a model of cooperation which is responsive to the needs of African countries.”

Mr. Modi indicated that his country will soon launch the next stage of a Pan-African e-Medicine project covering 48 African countries.

India joined the African Development Fund (ADF) in 1982. The ADF is the concessional financing window of the Bank Group that provides low income Regional Member Countries (RMCs) with concessional loans and grants, guarantees as well as technical assistance, and it joined the AfDB a year later in 1983.

The theme of the meetings, “Transforming Agriculture for Wealth Creation in Africa”, the Bank says mirrors India’s famous Green Revolution, which saved millions of people from famine and reflects agriculture’s vast linkages to other sectors and its centrality to Africa’s efforts towards poverty alleviation, food security and economic transformation.

In his keynote address, Dr. Akinwumi Adesina, the President of the AfDB said if Africa fulfills the Hi-5s. The Hi-5s are the Bank’s programme to drive development in Africa – These are Light up and Power Africa, Feed Africa, Industrialise Africa, Integrate Africa and Improve the quality of life for Africans.

Referring to a UNDP report, he noted that Africa will achieve 90 per cent of the SDGs if the continent fulfills the Hi-5s.

“What Africa does with agriculture today, will determine the state of food in the future,” he said.

He urged African countries to see agriculture as business and to develop it. “There is need for industrialization of agriculture,” he said.

By Emmanuel K. Dogbevi, in Ahmedabad, India
Copyright © 2017 by Creative Imaginations Publicity
All rights reserved. This news item or any portion thereof may not be reproduced or used in any manner whatsoever without the express written permission of the publisher except for the use of brief quotations in reviews.