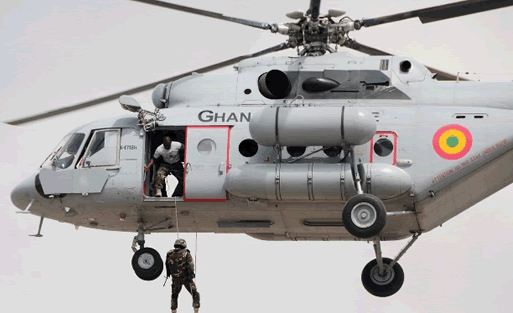 Group Captain Frank Hanson, Commander of the Air Force Base in Tamale has disclosed an array of unexploited investment opportunities in the Ghana Air Force (GAF) that economic managers can tap for rapid economic growth.

The Commander has also pointed out how the Air Force could help open up numerous business opportunities in Tamale and connect entrepreneurs to markets in neighboring countries in a way to reposition the Northern Regional capital as an investment hub.

Group Captain Hanson was speaking at the prestigious lecture of Ghana Technology University College Graduate School on future prospects of the GAF in nation-building.

It was on the topic: “Ghana Air Force operations in nation-building: Ghana at 60 years of independence, any future prospects.”

The lecture was to arouse and enrich policy discourse in Ghana’s civil-military partnership towards social and economic transformation.

Since GAF was created in 1959, its influence on nation-building has been described as ‘fundamental’ to national security, foreign policy and stability of the West African sub-region.

Group Captain Hanson said with growing domestic airline industry, there was the need to shift the capacity of GAF to link Tamale and specific conflict communities that have demonstrated the potential to wean themselves of war.

“A helicopter based Humanitarian Facilitation Air Corridor that has a wider multi-pronged humanitarian, and business focus will be an innovative strategy to open up the communities to rapid economic activities,” he said and thereby, eliminate the appetite for conflict.

He named Bunkpurugu as one of such communities to be opened up to economic activities after residents marked one year of peace and security following devastating chieftaincy conflicts that destroyed a number of lives and property.

“The peaceful atmosphere in that community is a potential candidate for the [Humanitarian Facilitation Air Corridor] that can facilitate the growth of agricultural and investment into these conflict areas,” he added.

“Similar to mobile money which is increasing businesses in conflict areas, the GAF capabilities can equally connect the business leaders to these zones to conduct on site feasibilities for development.”

As private business remained the engine of economic growth, he noted, it was essential for local businesses and military leadership to create innovative stakeholder consultations in order to tap into the capabilities of each entity.

GAF has the potential to link businesses and free zones across West Africa by air, he added.

Group Captain Hansen explained how the Force could be repositioned to help boost business growth and job creation.

He said: “Assuming a leading pharmaceutical company such as Ernest Pharmaceuticals takes advantage of the tax reliefs given for the production of essential drugs for distribution in Guinea Conakry; where they are no direct flights from Tamale where the factory is situated.

“The absence of air links between Tamale and Conakry should not inhibit our business and entrepreneurs.”

In the absence of air links, he said GAF had the reach and capacity to influence near abroad to develop business air corridors for local businesses to move their products across the sub- region until such time that the route becomes profitable for other airlines to takeover.

GAF contribution to peacekeeping operations to foreign policy, he noted, was another strategic option that is critical to nation-building.

This is because peacekeeping is increasingly driving Ghana’s foreign policy as a lobby for business people to gain UN procurement and other international opportunities.

Other businesses in Zimbabwe and Denmark, for example, are reported benefitting from UN peacekeeping operations.

A 2015 Zimbabwe Trade and Export Promotion report indicates that out of $17.5 billion UN Procurement budget, Zimbabwean companies managed to supply goods and services worth $76 million to agencies of the UN.

The Ministry of Foreign Affairs and the Confederation of Danish Industry in 2012 hosted a business seminar to supply goods and services to the UN. Danish companies got orders for $2.5 billion at that meeting.

Hanson said: “The point to be made here is that, the effectiveness of our contribution to peacekeeping does not come only in deployment of troops, but a strategic platform and lobby that can translate the gains of Ghana’s peacekeeping brand into business opportunities.”

He did not give immediate records on Ghana but said: “I am obliged that as a leading troop contributing country for UN operations, the potential of Ghana’s peacekeeping efforts is a lobby for Ghanaian businesses.”