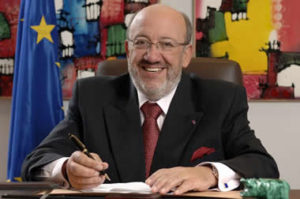 A statement signed by Mrs Rejoice Esi Asante, the Press, Information and Communication Officer of the Delegation of the European Union to Ghana and copied to the Ghana News Agency in Accra has indicated.

The statement said he is part of a pool of three high level personalities made up of former members of the European Commission designated by the EU to support the Commissioner for Humanitarian Aid, Neven Mimica, by carrying out targeted outreach activities with key EU  partners in view of the preparation for the future of EU-ACP relationship.

Mr Michel, who is on a West African Regional tour, will arrive from Abidjan on March 27 and depart Accra on March 28 to  visit Dakar and Lomé.

While in the country, Mr. Michel will meet with key Government officials and stakeholders to discuss the renewal of the Cotonou Agreement, both on the substance and the structure of the approach for bolstering it and to lay the ground for smooth and fruitful exchanges between the European Union and the ACP counterparts.

Mr Louis Michel, born in September 1947 is a member of the Alliance of Liberals and Democrats for Europe, a member of the European Parliament and the Belgium Mouvement Réformateur.

After a fruitful professional career as a teacher between 1968 and 1979, MrLouis Michel began his political life in 1999 and held various positions in political parties and national trade unions, local government bodies, regional assembly, the national parliament and in the national government in Belgium serving as Vice Prime Minister, Foreign Minister and Minister for Institutional Reform.

He has also been a member of the Benelux Inter Parliamentary Consultative Council and Member of the Convention on the Future of Europe between 1995 and 2004.

In 2013 Mr Michel was Special envoy of the International Organisation of French-Speaking Countries to monitor the situation in the Central African Republic.