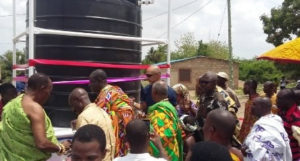 One was opened at Gaymtutu community in East Gonja District in the Northern Region and the second one was provided at Otuaplem, Amasaman, in the Ga West District, in the Greater Accra Region.

A statement issued to the Ghana News Agency said the organisation had been serving rural communities in need since 2015 and now has six facilities across the country.

Project Maji’s proprietary technology allows them to set up a fully functioning, high capacity solar powered water kiosk for about the same cost as a hand pump.

However, the Project Maji solution offers greater capacity and reliability and multiple dispensing taps to ensure the community does not have to form long queues while waiting for water.

This allows children to fetch water efficiently and attend school on time, and for women to use the time saved in collecting water to take up wage earning work.

Project Maji has worked with the Cape Coast University in Ghana to have its sites independently audited so that their impact can be verified, and indeed the results have come back positive every time.

With their test phase now officially complete, Project Maji is in discussions with several Ghanaian and international corporations for large sponsorship deals, as well as the CWSA and Ministry of Water to enable them to expand more widely and more rapidly.

They have also just installed their first facilities in Kenya marking the beginning of their expansion into other needy Sub-Saharan African countries.

Parliament approves over GH¢500m for LGS