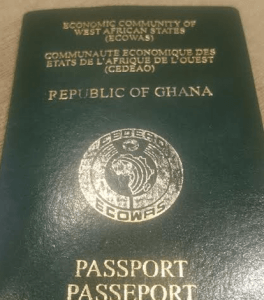 The Ghana passport ranks 126 on the Nomad Passport Index covering 199 countries of the world. The methodology looks at five factors to rank the value of citizenship in and, by extension, the passport of the countries.

Ghana has an overall score of 44 points. The passport of Seychelles is the highest-ranking of an African country with 84.5 points and ranks at 56.

The publishers of the Index believe that the most important factor in the value of a passport is the travel opportunities it affords.

“The Nomad Passport Index places the highest priority on visa-free travel, which is responsible for 50 per cent of each country’s total ranking. This Index relied on data from the IATA, the Henley Visa Restrictions Index, and news sources to determine each country’s score, which is the number of countries that allow visa-free access or a straightforward e-visa or visa on arrival process to holders of each country’s passport. For example, Germany scores highest with 177 countries,” the publishers said.

In looking at taxation, the Index took into account a country’s tax regime. Eritrea and the USA scored the lowest of 10. The US taxes its citizens irrespective of where in the world they live and work.

Using the World Happiness Report and the Human Development Index the Index looked at how safe the holders of a country’s passport feel as when they travel around the world as well as the hostility they face outside their countries.

A country’s passport that allows dual citizenship – that’s citizenship of one other country or multi countries earned the passport higher marks.

Ranking the country’s passports on freedom, the Index looked at the World Press Freedom Index and Economic Freedom Index. It also looked at the factors such as mandatory military service, government spying programmes, incarceration rate, and laws targeting non-resident citizens (such as the United States’ Foreign Corrupt Practices Act).

In July 2016, however, Ghana opened its borders allowing citizens of African countries to get visa-on-arrival at all its entry points.

Copyright © 2017 by Creative Imaginations Publicity
All rights reserved. This news item or any portion thereof may not be reproduced or used in any manner whatsoever without the express written permission of the publisher except for the use of brief quotations in reviews.