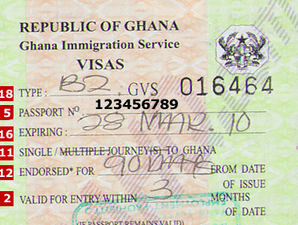 Ghana has started a visa-on-arrival scheme at the Kotoka International Airport (KIA) for all African Union Nationals whose countries do not have a visa-free agreement with the country, the Ghana Immigration Service (GIS) has said in Accra.

“All AU nationals affected by the policy who arrive in the country must have a passport, valid for at least three months from the date of entry; they must have a return ticket or evidence of onward travel; they must show evidence of sufficient funds and proof of accommodation before they are granted visas.

“All such visas would be issued for validity of 30 days; they would be subject to the provisions of Section 4 of the Immigration Act, 2000 (Act 573) which applies to all travelers entering Ghana,”  a statement signed by Mr Francis Palmdeti, the Head of Public Affairs of GIS, and copied to the Ghana News Agency said.

The statement said the programme was in line with a directive in President John Dramani Mahama’s State-of-the-nation’s address in Parliament this year.

This current arrangement, it said, would be piloted at KIA for three months and, thereafter, extended to all other entry points of the country.

“President Mahama, in this year’s State-of-the-Nation address delivered on February 26, 2016, informed Parliament that all AU nationals would, from July 2016, be issued with visas on arrival following a decision taken at the Executive Council Meeting of the African Union,” the statement said.

It said: “The GIS, being the government agency mandated to regulate migrant flows into the country, intends to ensure the smooth implementation of the new policy and therefore has initiated the modalities to give effect to the policy”.

The statement, therefore, entreated the public as well as foreign missions and embassies to take note of the modalities.

The Ghana Immigration Service would continue to execute its mandate professionally and effectively, having in mind the nation’s policy of making Ghana an attractive destination to investors and tourists, it said.