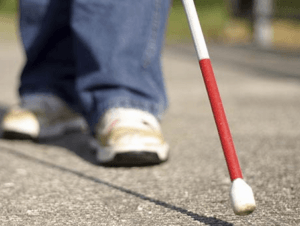 Alhaji Abubakar Iddrisu, the Chief of Blind Union at Sabon Zongo in the Ablekuma Central, has appealed to the Electoral Commission (EC) to provide them with braille for voting in this year’s elections.

He also called on the EC to train the blind on the use of the braille to avoid their votes being made public by their guides.

Alhaji Iddrisu made the call when the National Commission on Civic Education (NCCE) organised a day’s sensitisation programme for visually impaired persons at Sabon Zongo in the Ablekuma Central in Accra.

He said: “The difficulty is that the one who will escort you to vote normally chooses a different party against your wish,” adding that; “I know that one’s vote is his secret, but sometimes before you return home after voting people get to know which party you had voted for which becomes embarrassing.

“This is the why we are calling on the EC to introduce the braille to bring some changes particularly to protect our votes,” he said.

Mrs Comfort Azalletey, the Acting Officer-in-Charge of Ablekuma Central NCCE, in an interview with the Ghana News Agency, said empowering physically challenged persons in society to know their civic responsibilities would help prevent exploitation by politicians.

She said it also assists them to always remain committed at ensuring peace before, during and after elections as well as making inputs in national affairs.

Mrs Azalletey advised the youth not to allow themselves to be used by politicians to destabilise the peace in country hence the need for NCCE to ensure that all stakeholders remained committed to activities of peace in the areas.

Miss Jane Amerley Oku, the Chief Executive Officer of Janok Foundation, a community-based organisation at Sabon Zongo, expressed gratitude to the officials of the NCCE for empowering the visually impaired persons on their civic rights and political education.