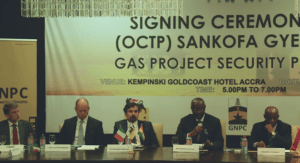 Yesterday September 22, 2016, the Ghana government, its partners, and the World Bank signed an agreement to provide guarantees totaling $700 million for the Sankofa Gas Project, but despite the euphoria that greeted the signing ceremony, one major delay for timely gas production still remains.

The Ghana National Petroleum Corporation (GNPC) had announced in February 2016 that first gas was expected in February 2018, in addition to 30,000 barrels of oil daily to be produced from August 2017.

However, information on the project made available to ghanabusinessnews.com, says “the only major delay so far relates to the contract procurement of the Onshore Receiving Facilities (ORF) at Sanzule. The award of contracts for construction of ORF, originally scheduled to be on February 2016, has been delayed with the approval of award still pending with GNPC. This is expected to result in the delay of the estimated first gas date, which is estimated to be 20 months from award of the contract under the compressed construction schedule in 2018. New target date for First Gas is the end of second quarter 2018 instead of first quarter 2018 in the original plan.”

The World Bank says it is supporting the project through what it calls a unique combination of an IDA payment guarantee and IBRD (Enclave) loan guarantees. This innovative mix for a total of $700 million has helped mobilize $7.9 billion by the private sector, it added.

The IDA Payment guarantee of $500 million, will be covering the risks of non-payment by GNPC of its payment obligations under the Gas Sales Agreement, and the IBRD Enclave Loan guarantees of $200 million will go into supporting the project financing for the private sector by covering debt service defaults, as a result of breach of specified contractual obligations by GNPC and the government of Ghana.

The Bank further indicates that over the last 12 months it negotiated its Guarantee legal documentation with the project sponsors, Eni/Vitol, GNPC, the Government of Ghana and two international commercial banks – HSBC and Standard Chartered, who jointly provide a $500 million Letter of Credit in the context of the World Bank’s Payment Guarantee.

Speaking at the signing ceremony, the World Bank Country Director for Ghana, Henry R. Kerali said the Bank has made energy a priority under its strategy to achieving the World Bank’s Twin Goals – eliminating extreme poverty by 2030 and boosting shared prosperity – in sub-Saharan Africa.

“And within this strategy, we strive to bring private sector projects with innovative financing solutions to our client countries,” he said.

He noted that the Sankofa Gas Project is well aligned with the Bank’s strategy.

According to Kerali, the guarantees are a well-structured energy investment that has the potential of transforming Ghana’s energy economy.

“Starting in 2018, the Sankofa Gas Project is expected to supply indigenous natural gas for about 1,000MW of power plants – the gas supply is expected to be a stable and secure, local source of fuel that is not subject to the fluctuations of rainfall or the global price of oil. Furthermore, natural gas is a much cleaner fuel than crude oil, which Ghana uses on a large scale today. The Project will therefore assist in reducing greenhouse gas emissions resulting from power generation,” he added.

The Minister of Finance, Seth Terkper, one of the signatories to the agreements, stated that the Sankofa field security package is structured in layers to cover risks.

According Mr. Terkper, there is a payment mechanism that, among others, channels receivables of the GNPC through a designated offshore account structure to receive proceeds of GNPC’s gas sales to power producers, and if insufficient, GNPC’s share of petroleum revenues (Net CAPI) from the field, as approved by Parliament under the Petroleum Revenue Management Act.

There is also a Reserve Escrow Account funded by the GNPC currently estimated at approximately $140 million, being equivalent to 4.5 months of gas sales, which would be accessible only if the proceeds from the above payment mechanisms are insufficient to meet the GNPC’s ongoing payment obligations.

There is also an IDA guaranteed $500 million SBLC, with a renewable 15 year tenor, in favour of the Private Gas Suppliers, which would be accessible only if the first two security layers have been exhausted, and a limited Sovereign Guarantee of up to $l 00 million, will be triggered any time the Letter of Credit has been drawn down by a total of $400 million, Terkper said.

The Finance Minister also emphasized that, the primary sources of payment by GNPC under the Agreements are the proceeds from the sale of purchased gas, and as support guarantee, GNPC’s approved share of petroleum revenue from Jubilee, TEN and Sankofa Gye Nyame, as well as the World Bank PRG and sovereign guarantee.

ENI, the lead Operator of the block holds a 47.2 per cent participating interest, while Vitol holds

37.8 per cent. The GNPC holds a 15 per cent carried interest and 5 per cent additional participating interest.