Saltpond asks for its fair share of national cake

September 23, 2016 General News Comments Off on Saltpond asks for its fair share of national cake 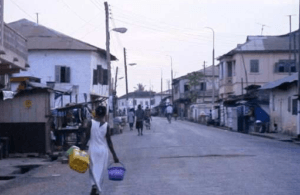 The residents of Saltpond, in the Mfantsiman Municipality, of the Central Region have threatened to boycott the December polls as a protest against what they describe as a ‘continuous neglect and marginalisation of the town’ by successive governments.

They said in spite of the role and contribution of Saltpond towards the socio-economic and political development, the town had been abandoned and was in a state of decline with respect to development projects.

Speaking at a media conference, Dr. Ransford Gyampo, the President the Saltpond Forum, a non-profit community based Organisation (CBO), said the town had been abandoned for far too long, therefore, it would do anything possible to seek its development.

He said the Saltpond Forum, which organised the conference, was prepared to mobilise the youth base of the town against any political party that would continue to ignore and relegate the development of the town to the background.

He, therefore, urged the Government to adopt positive and proactive approach in addressing the pertinent developmental challenges confronting the town.

“We are as a matter of urgency, demanding that the Government provide the people of Saltpond with an update on the resources accruing from the oil field and how beneficial it has been for us,” he said.

Dr Gyampo said Saltpond had produced great personalities who had contributed immensely to Ghana’s development and deserved to be honoured by developing their hometown to create employment for their grandsons and daughters.

“If the two main political traditions in Ghana today have their historical antecedents in Saltpond, then it is logically plausible to argue that Saltpond undoubtedly qualifies to be labeled as ‘Ghana’s political Mecca,” he said.

He said the town also served as the avenue for important political meetings and activities that led to the formation of the first political party in the country, United Gold Coast Convention (UGCC) and the Convention People’s Party (CPP).

Dr Gyampo said it would be proper to establish a political tourism or a mausoleum in Saltpond to keep the town alive considering the important political role it had played in the political dispensation of the country.

He complained that almost all the factories in the town, including the Saltpond Ceramics Factory and the Unilever soft drinks factory, which were vibrant until the early 1990s, had collapsed.

The Saltpond Forum alleged that there were some indications to relocate the Municipal Capital from Saltpond to Mankessim because of the town’s stalled development, saying it would not augur well for the progress of Saltpond.

He said politicians had been treating the people of Saltpond with contempt and gross disrespect because since 1992 no President had graced their Nkusukum Festival, while they attended other festivals in the Region.

They urged distinguished personalities who hailed from the town to be concerned and contribute to the development of the area.

Minister for Lands and Natural Resources, Samuel Abu Jinapor, has disclosed that over seven million …