Spanish officials discover 737 assault riffles, grenade launchers worth $1.64m from US to Ghana 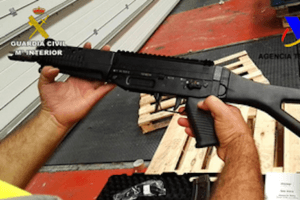 Spanish security officials have discovered a cache of arms destined to Ghana from the US, according to Swiss news source swissinfo.ch.

The report citing other reports, said the Spanish Civil Guard uncovered the stash of 737 assault riffles and 72 grenade launchers, all made in Switzerland being sent to Ghana from the US. The total value of the cache of arms has been put around $1.64 million.

The reports indicate that the source of the arms can be traced to Hungary, making their appearance in Spain a mystery. The discovery, the report says, was made on August 4, 2016.

Citing Spanish authorities, the reports say the arms were declared “disassembled”, but they were “new rifles in their original packaging. According to the accompanying documents – which had some information missing – the weapons were to be transported to Ghana from commercial gun dealers in the United States.”

The Spanish are now investigating the matter, the report said.

A Swiss publication, Tages-Anzeiger which looked at the delivery’s export file, confirmed that the weapons were indeed made in Switzerland and the exporters expected the delivery to go to Ghana, via a dealer in Hungary, in 2010.

It also put the total value of the arms around $1.64 million, adding that the buyer, was given as the National Security Council of Ghana, noting that assurances were made that the weapons would not be sold on, and would be for military use.