May 25, 2016 General News Comments Off on Vegetable farmers urged to form groups 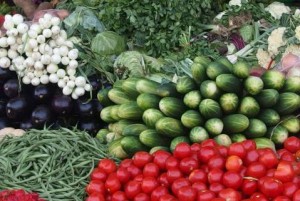 Vegetable farmers have been urged to form groups in their communities to help find solutions to the challenges they face.

Mr Freeman was addressing about 180 members of ASCUM from the Birim Central Municipality and the Birim South District to discuss how to access markets for their produce, among other issues.

ASCUM has more than 1,250 members engaging in vegetable farming in six districts of the Eastern Region with 70 per cent being women. It uses traditional music to promote agriculture.

Mr Freeman said farmers had now seen the advantage and potential of their groupings to help market their produce and gain more control over market prices.

He said ASCUM would soon establish a training centre for those who wish to get into vegetable farming.

Mr Freeman said strengthening farmers’ groups in urban vegetable production systems was one of the ways to solve the Movement’s marketing problems, and advised members of the group who owned cocoa farms to properly ferment the cocoa to avert cheating by cocoa purchasing clerks.