Mining companies urged to be transparent with communities

May 17, 2016 General News Comments Off on Mining companies urged to be transparent with communities 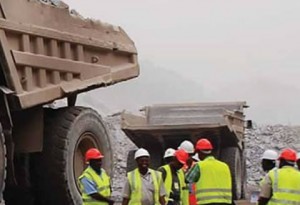 Mr Ernest Okyere, the Upper East Regional Manager of the Minerals Commission, has urged Mining Companies to be transparent in their local communities to minimise conflicts.

Mr Okyere made the appeal at Bolgatanga at the Second Local Dialogue Forum on the Voluntary Principles on Security, Human Rights and Peace Building in communities affected by mining, oil and gas.

The stakeholders’ forum, which have been serialised, attracted mining companies, civil society organisations, chiefs, district assemblies and the security agencies.

The West African Network for Peace building (WANEP), in collaboration with the Fund For Peace in some Mining Communities in Ghana, organised the forum with the aim of deliberating on the causes of conflicts in the mining communities.

The forum was also used as a platform to solicit input from the stakeholders to be factored into a national dialogue, which would take place in July this year, in Accra.

Mr Okyere attributed many of the causes of conflicts in mining communities to the lack of transparency on the part of some mining companies and advised such companies to be more open in their dealings with their local communities.

The Acting National Coordinator of WANEP, Mr Albert Yelyang, expressed optimism that the impending national dialogue, which would involve major stakeholders in the mining sector, the mining communities and the sector Minister, would help fine-tune the input from the previous engagements to help reduce conflicts among mining companies and communities.

“The best practices and lessons gathered at the series of programmes will all be considered at the national stakeholders’ forum and also form a common platform for addressing issues to help resolve conflicts,” he said.

Mr John Messner, the Executive Director of Fund for Peace, explained that Ghana was among the first countries to sign the Voluntary Principles on Security and Human Rights and Peace Building, aimed at creating a common platform for mining companies and communities to minimise conflicts.

He said there had been a significant reduction in conflicts among mining companies and communities in countries, which had embraced the voluntary principles, and mentioned Colombia and Australia as examples.

Ms Hannah Blyth, the Programmes Manager of Fund for Peace, gave the assurance that her outfit, with WANEP, was committed to supporting Ghana to implement the Voluntary Principles, which she signed.

She commended the stakeholders for making significant input and said those would inform policy makers and the Government to make better decisions for the mining sector.