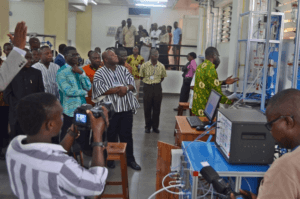 The Ministry of Petroleum through its Oil and Gas Capacity Building Project (OGCBP), has commissioned two state of the art laboratories, at the Kwame Nkrumah University of Science and Technology (KNUST), Kumasi.

The two facilities – the chemical and petrochemical laboratories at the KNUST’s College of Engineering, would help boost research, teaching and learning.

A statement signed by Mr Edward Abambire Bawa, the Head of Communications at the Ministry, and copied to the Ghana News Agency on Monday said the Petroleum Minister Mr Emmanuel Armah-kofi Buah in a speech read on his behalf said the OGCBP seeks to improve public management and regulatory capacity while enhancing transparency and strengthen local technical skills in Ghana’s oil and gas sector.

“To date a total amount of $12.9 million has been spent on KNUST’s laboratory refurbishment, goods and equipment, and training,” he said.

Professor William Otoo Ellis, the Vice Chancellor, KNUST, expressed his gratitude to government for the continuous support in building the capacity of the university.

According to Prof Ellis, the University would apply strict maintenance rules to ensure that the laboratories are always in good condition.

The statement said the OGCBP had supported KNUST in various ways; to date, a total of 11staff of the university had benefitted from postgraduate education abroad.

“Six of the MSc have been at post since the beginning of the 2014/2015 academic year and constitute the foundation of staffing in the petroleum Engineering programme.

“A number of short-term visits by international staff to lecture on the existing undergraduate programme have also been facilitated by the project,” it said.

It said furthermore, books and reference materials had been procured and installed in the College of Engineering Library.

It noted that a new building housing the six thematic Petroleum engineering laboratories and equipment was commissioned in April 2015.

“Last but not least, equipment worth about $2.5 million has been procured and set up in four thematic Labs: Process Development Lab, the unit Operations Lab, Biotechnology Lab and Instrumentation lab,” it said.

The statement said currently what remains outstanding for KNUST under the OGCBP is the completion of training of four PhD students in the Petroleum and Petrochemical Engineering Departments.

It said it is expected that two PhD holders would return to the College of Engineering later this year while the remaining two would join the faculty next year.

It noted that in addition, seven laboratory staff have been earmarked for training this year on the use of the newly installed equipment.