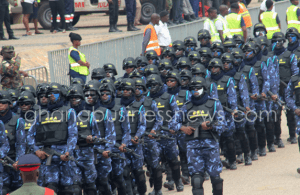 The 59th Independence Anniversary parade brochure which has been found to contain errors including stating the guest of honour, President Uhuru Kenyatta of Kenya as the President of Ghana also contains inaccuracies about  Ghana’s geographical location.

The quality of English language in the brochure has dimmed the highlights of the parade itself and brought shame onto the country. The Kenyan media for instance has been ridiculing the country since the event.

While no one has owned up yet for the errors,an attempt by the acting Director of the Information Services Department (ISD) to take responsibility in an apology letter didn’t go well with the Ghanaian public who has been angered by the act. In the first apology letter accepting responsibility there was an error – the letter was dated January 12th, 2016.

Subsequently, employees of the ISD have gone public denying that they had anything to do with the brochure.