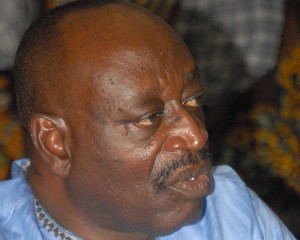 Natural supply of water is at risk of depletion if measures are not taken early to arrest the growing rate of the reduction caused by natural and human factors, Dr Kwaku Agyemang-Mensah, Minister of Water Resources has warned.

Some factors responsible for the reduction are catchment degradation due to farming along water banks, climate change and seasonal variability and increasing population growth and urbanisation.

Dr Agyemang-Mensah, who is also responsible for Works and Housing, also blamed pollution caused by the discharge of waste water in to water bodies and illegal mining (galamsey) for the threat on the supply of natural water.

In a statement on the floor of Parliament on the current water shortage that has his parts of the country, the Minister assured the nation that the Ministry, with other stakeholders, is adopting measures to address the situation.

He said compliance of water protection regulations would be strictly followed and the buffer zone policy would be implemented.

In the urban areas, the water coverage is estimated at 76 per cents, with an estimated capacity of 65 billion gallons per annum.

According to the Minister, the water needs of the Greater Accra Metropolitan Area (GAMA) alone accounts for 65 per cent of the urban water demand, and addressing that contributes significantly to addressing the water problems in the country.

“The good news is that GAMA now produces more water that is required for now,” the Minister said, but added that “the water supply challenges we are facing in some parts of GAMA is as a result of distribution network challenges and I am happy to announce in this connection that Government has secured a grant from the World Bank to address it comprehensively.”

Dr Agyemang- Mensah cautioned that the “current condition of drought should be a wakeup call, and “we should start to put in pragmatic efforts to safeguard our environment… we should protect ourselves from the negative effects of climate change.”

Mr Frank Annoh-Dompreh, MP for Nsawam-Adoagyir, said there is the need for implementation of water regulations, and called for more pro-activeness in addressing challenges of water and its supply by stakeholders.

Mr Richard Mawauli Quashigah, MP for Keta, appealed to the Ministry to go back and implement water supply programmes in some communities in his constituency under the Small Town Water Projects.

Mr Alexander Afenyo-Markin, who last week made a desperate call for urgent government assistance to his constituents, also lashed out at illegal mining operations that have polluted a number of water bodies, including the Rivers Offin, Densu and Pra.

He called for swift interventions to save the water bodies from further pollution.

Mr David Tetteh Assuming, Chairman of the Select Committee on Water Resources, Works and Housing, wondered why water shortages occurred  in spite of the heavy annual rainfall and presence of many water bodies, adding that there is the need to capture a lot of water during the rainy season to be used in the dry season.

Facebook Twitter WhatsApp LinkedIn
2016-03-01
Emmanuel Dogbevi
Previous They don’t believe in the future!
Next I don’t wish to be a ‘kayayo’