Home / Feature Articles / I don’t wish to be a ‘kayayo’ 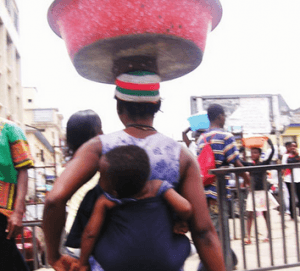 At night in many parts of Accra, many female head porters are seen sleeping in open spaces and this makes them vulnerable to the vagaries of the environment and violence from acquaintances and strangers.

These female head porters (kaya yei) often come from distant rural communities in search for greener pastures in the urban areas. And they have to endure varied experiences as they climb the ladder of life.

“It is not my wish to be a kayayo but I have no choice because I have no form of formal training or education to practice an acceptable vocation, Ayishatu, a head porter at the Tema Station, told the Ghana News Agency in an interview.

With tears in her eyes, she called for assistance from all quarters so that she and her other colleagues can learn a decent vocation or trade so they would be able to take care of themselves and their families.

Ayishatu said it had always been her dream to be a fashion designer but that wish remains a wish as she strives to earn a living before actualizing her dream.

Mohammed, a truck pusher, said sometimes I feel down and depressed when I see my age mates make a decent living whiles I have to carry loads to fend for myself.

He said he dropped out of school when he lost both parents and since then he became a head porter.

He said it is not only my truck I intend pushing but I am determined to push harder in life to achieve my goal of becoming a business tycoon.

This, he said, I intend to do by reading and educating myself with the money I make from this business of truck pushing.

The government has over the years initiated various interventions to help the youth in this occupation. Such interventions include the YES programme which seeks to train head porters in various vocations including hairdressing, dressmaking as well as loaning them money to start or boost their businesses.

Mrs Matilda Amissah – Arthur, the second lady of the country, has also endorsed and supported the Pamela E. Bridgewater Project, which is aimed at educating the disadvantaged head porters and displaced children in the country.

Making a donation of educational materials to children of head porters as part of the Pamela Bridgewater Project at a recent event, she said the initiative was targeted to provide a better future to head porters through education, advocacy, protection and research.

She said a campaign to enroll the head porters in schools, is dubbed ‘Sponsor Kayayei to School Program’.

It is aimed at sponsoring the education of under-aged girls, who have migrated from the northern sectors of the country to the south in search of menial jobs.

The ‘Sponsor Kayayei to School Program’ would also enroll baby-sitters of wards of kayayei’s and other displaced children, who seen roaming the streets of suburbs in Accra.

Mrs Amissah-Arthur called on corporate institutions and individuals to join the campaign to give education to the young girls to make them responsible citizens in the country.

She called on the head porters to also contribute their widow’s mite to the development of their children and urged them to consider elongating the intervals between births.

Hajia Zainab Joyce Mahama, the National Women’s Organiser of the National Democratic Congress, in an interview with the Ghana News Agency, said the Youth Enterprise Support (YES) programme is aimed at improving the lot of the youth, women and the vulnerable.

“When they[head porters] enter into YES, their lives will change since some programmes in yes such as loan facilities, schools, youth in agriculture, women attending school, enrolling in nursing are geared for them,” she said.

Ghana is second, only to Côte d’Ivoire, in global production of cocoa – a major …