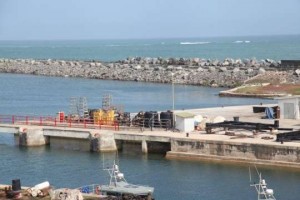 The Takoradi Port is undergoing transforming as part of an expansion programme to meet modern requirements of services to become the preferred destination port in the West African sub-region.

The port is therefore expected to reclaim 53 hectares of land to create space to handle larger vessels and accommodate about 100,000 metric tons of cargo while increasing its revenue generation.

Mr Ebenezer Afadzi, acting Director of Takoradi Port said at a press briefing to give update on the expansion programme, which is entering its second phase.

The first phase of the expansion, which started in November 2014, is expected to be completed by the end of May this year. The Port was constructed in 1928 during the colonial era purposely for exporting timber and logs.

The completion of the expansion works would generate employment and eliminate double loading, improve the turnaround time and reduce the cost of doing business at the port.

Mr Afadzi said the port had also instituted top-notch security measures with competitive tariffs that had made it more attractive for larger vessels in the West Africa sub-region to berth there.

He pointed out that the Ghana Ports and Harbours Authority (GPHA) and Government of Ghana secured an initial loan facility of €197 million from the Belgian Government.

In January this year, Parliament also approved another loan facility of €160 million for the continuation of the project and the second phase of the expansion works is expected to be complete within two to three years.

Mr Afadzi said both local and foreign investors would be attracted to operate at the port and revealed that the Nigerian entrepreneur and billionaire Aliko Dangote, had expressed interest in establishing a cement factory at the port.

Mr. Lynacc Stly, Project Manager for Jan De Nul, said the Belgian contractor had employed 95 per cent indigenes to undertake field works while 50 per cent of the management staff were Ghanaians in compliance with the local content regulations.

He said he was impressed with the work attitudes of the Ghanaian workers, and added “it will help in transferring knowledge and technology from the expatriates to their local counterparts”.