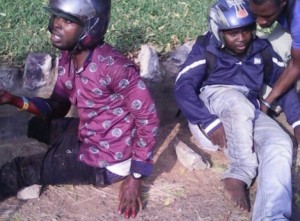 The National Secretariat of the Ghana Private Road Transport Union (GPRTU) has rewarded Mr Frank Ade, the taxi driver who knocked down the two armed robbers in the Koala robbery episode, with GHȼ1,000 for his bravery.

Mr Kwame Kumah, National Chairman of the Union, who made the presentation pledged their support to the Ghana Police Service in the fight to reduce armed robbery in the country.

He appealed to the Police Administration to initiate collaborative programme with GPRTU to train selected taxi drivers to enable them monitor the activities of robbers in the night.

In another development, the Greater Accra Regional Secretariat of the GPRTU has expressed their unhappiness about some false reports circulating on social media that some members of the Union of the Takoradi Station at Kaneshie in Accra had fought, resulting in injuries.

Mr. Emmanuel Nii Ankrah, Greater Accra Regional Chairman, who denied the reports told the Ghana News Agency in an interview, that it was about time Ghanaians changed their attitude towards planting lies on the internet.

He said the reports were a calculated attempt by some unscrupulous people to tarnish the image of the branch members and the entire Union.

“The issue came to me as a surprise when radio stations started calling me to find out what would ignite the fight among the drivers which creates the impression that there is no peace among the branch members.”

Nii Ankrah said he quickly organised his executives to visit the members only to be told by the branch chairman, Mr Kwesi Ansah, that nothing had happened.

He said Mr Ansah expressed dismay and wondered who might have planted the story on the social media.

Nii Ankrah admonished players on the social media, especially the youth to concentrate on issues that would help move the nation forward, but not on things that would erode the gains made so far in development and create social unrest.