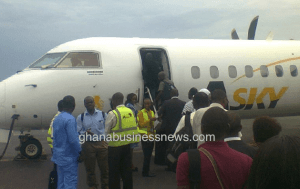 Transport infrastructure and services for intra-continental travel have been cited as a key constraint limiting the growth of tourism in Africa by the 2015 Africa Tourism Monitor, an annual report on tourism in Africa.

The report, a publication of the African Development Bank (AfDB), says although many major airlines fly to Africa from North America, Europe and Asia, once visitors reach the continent, they encounter difficulties in intra-Africa travel from East to West, and North to South.

“One of the major challenges to travel in Africa is stringent and restricted air service markets, designed to protect the share held by state-owned air carriers.”

The Yamoussoukro Decision or “Open Skies for Africa” adopted at the start of the millennium to deregulate air services on the continent are yet to be implemented though the latter alone is believed to be capable of creating 155,000 new jobs and contributing $1.3 billion to the continent’s GDP if implemented by only a quarter of African countries.

“Some [African] countries have not signed up to the Yamoussoukro Decision, or have failed to fully ratify it, while others that are signatories have not yet implemented it.”

“Another factor that has curtailed its implementation is that some African countries have entered into Economic Bilateral Partnership Agreements (EBPA) with airlines from other continents, which conflicts with the spirit of the Yamoussoukro Decision,” the report says.

The tourism action plan also launched in 2004 under the New Partnership for Africa’s Development (NEPAD) has also not been implemented.

Other major challenges to tourism in Africa in 2015 were security issues, especially in North Africa, Mali and Kenya, and the outbreak of Ebola which created “a climate of fear” that spread to many other African countries far away from the source of the outbreak.

The report indicates that, of the 80 countries for which travel warnings were issued by the US State Department, 30 were located in Africa.

According to the report, many of Africa’s iconic species – animals that attract tourists from across the globe – are on the brink of extinction; poaching and illegal trade in protected species have reached unprecedented levels and authorities need to strengthen their data production in this area.

Overall, the report says the tourism sector in Africa is growing. In 2014, a total of 65.3 million international tourists visited the continent – around 200,000 more than in 2013.