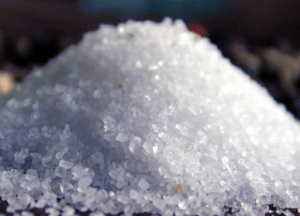 Mr Mahendra Nuthalapatin, Managing Director of Kensington Industries Limited, has lamented about delays in commencing commercial salt refining by his Company in the Kpedzakope-Adina salt enclave in the Volta region,  due to problems with the local people.

The latest problem took place on Wednesday December 2, during which a group of people torched the company’s excavator and tipper truck, accusing the company of destroying their heaps of salt and salt winning areas

The Company, with 7,000 hectares salt concession in the Kpedzakope and Adina salt enclave in the Volta Region, has its 200 metric tons a day capacity refinery to produce food grade salt for export and domestic markets   standing idle.

“For two years the huge potential of the refinery has been idle, Mr Nathalapatin told a meeting of the Volta Regional Security Council (REGSEC) whose members led by Helen Adjoa Ntoso, Regional Minister, were at Kpedzakope following the latest skirmishes.

A total of 15 people were said to have been arrested in connection with the disturbances in which the Keta Divisional Police Commander was said to have narrowly escaped being killed but with a head injury.

The Company was said to have lost six of the 15 years for which it was to operate the concession.

The REGSEC meeting with management of the company was to assure them of the commitment to create a peaceful atmosphere for the company to operate in.

He said the Company which was operating in Nigeria and several African countries, was attracted to Ghana because of the peaceful atmosphere and the immeasurable potentials for commercial salt production.

“We want to do peaceful business, and not fight the people,” Mr Nathalapatin said.

He said some African countries, including Ivory Coast, were ready to provide a competitive atmosphere for the Company to operate in.

“As Dankote brings cement to Ghana so we also take salt to Nigeria,” where he said local production of food grade salt could meet only half of the demand which had to be made up with imports.

He said his company planned to build a jetty from where salt could be shipped to Nigeria.

Mr Nathalapatin took the REGSEC members round its refinery and machines, and assured them that the Company would co-operate with and transform the lives of people in the area.

Ms Ntoso assured the Company of the government’s commitment to create a peaceful atmosphere for the Company to operate in.

Addressing the people of Kpedzakope, she said the government would be tough on rising violent tendencies in the Ketu South Municipality.

Ms Ntoso said the Volta Region had been craving for foreign direct investments, and must therefore, encourage rather than frustrate investors who had decided to locate in the region.

She, therefore, advised communities in the enclave to use dialogue and lawful means in resolving their differences with the only investor in the area.