December 14, 2015 Editorials/Opinion, Lead Comments Off on Power Minister’s response on AMERI deal is economical with the truth

Over the weekend, Norwegian newspaper, Verdens Gang (VG) published what is a thorough investigative report on a deal that Ghana signed with a Dubai company AMERI for a 250MW power plant in February 2015.

The newspaper stated among other things that the CEO of the company at the time the deal was signed, one 40-year-old Umar Farooq Zahoor is a wanted criminal in Norway. The Pakistani Norwegian the newspaper says an Oslo man who is wanted for fraud and organized crime by Norwegian and Swiss police for spectacular acts of fraud committed in the last ten years.

The newspaper writes: VG showed the minister a picture, and he pointed to the Pakistani Norwegian right away. He knows him as the head of the Ameri Group.

– I know him; he is the Chief executive of Ameri Group, Donkor says.

Then we show the minister a picture of the man who co-signed the agreement with Umar Farooq Zahoor, a prince from the ruling family in Dubai. The minister has no doubts:

– The sheikh, his royal highness. They both work for Ameri Group, he said.

The newspaper also said the deal which is estimated at $510 million shouldn’t have cost that much. It indicated that its investigations shows that at least it should have cost about $220 million.

The Minister in the statement explained that the quoted price of $220 million in the Norwegian story for outright purchase of similar turbines is exclusive of all other costs such as auxiliaries, balance of plant, civil works, sub-station, installation of equipment, cost of financing, operation and maintenance etc, cannot be true.

It is curious that the Minister says the extras as he listed above would cost more than the plants. The TM2500+ plant according to GE is “a complete turnkey energy solution”. He needs to explain further and in detail what kind of auxiliaries, balance of plant, civil works, sub-station, installation of equipment and so on are needed for the plant to operate.

However, Algeria got a deal for the same types of turbines from GE. A report by ESI Africa says “under a $161 million contract, the General Electric’s Distributed Power business is helping gas-rich Algeria address its peak power demands and improving the strength and reliability of the grid by immediately supplying Sonelgaz with eight TM2500+ aeroderivative gas turbine-generators.”

The Minister’s assertion that Farooq was just a witness to the deal doesn’t hold water. At the time the agreement was signed, he was the CEO of AMERI. He may not be any more but he was, as the Minister himself confirmed to the reporters from VG in his office.

The Minister’s position that the publication is false doesn’t hold water. The investigation was done in three countries, Ghana, Norway and Dubai.

The Minister also claims that the deal is a build own operate and transfer (BOOT).

The Business Dictionary, an online source defines BOOT as a Financing arrangement in which a developer (1) designs and builds a complete project or facility (such as an airport, power plant, seaport) at little or no cost to the government or a joint venture partner, (2) owns and operates the facility as a business for a specified period (usually 10 to 30 years) after which (3) transfers it to the government or partner at a previously agreed-upon or market-price.

A Google search by ghanabusinessnews.com for the price of the TM2500+ turbines showed that one turbine costs $22 million.

Sadly, the Minister of Power fails to answer the questions raised in the VG report.

According to information on the website of GE, this is what a TM2500+ is:

It is described as a complete turnkey energy solution that can provide power whenever and wherever it is needed. 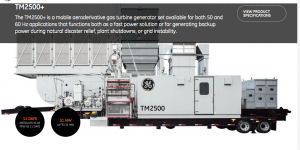