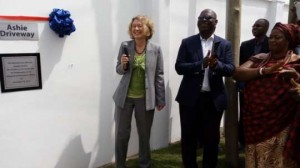 Speaking at the 25th anniversary celebrations of the Margins Group – an Identity Security and Associated Transactions Company – Degnbol said the private sector is key to accelerating the country’s economic development and needs to be supported.

She said the margins group, although a private sector player, has put Ghana on the world map in the area of printing of Identification Cards.

The event was also used to unveil a plaque for Ashie Driveway within the premises of Margins Group in honour of Mr Ashie who reposed confidence in the vision of the company and awarded them the first international contract, a turning point in the growth of the company.

The Ambassador said the story of the Margins Group should be an inspiration to other Ghanaian companies that with hard work, commitment and dedication they could also achieve their set goals and objectives.

She said the outlook for the company was very bright as there was a huge demand for hi-tech integrated solutions globally.

She pledged her support to the Margins Group to assist the company to meet its goal of being the first and the only full service Ghanaian-owned company certified in card and security printing in sub-Saharan Africa.

The Margins Group today is unsurpassed in the West African sub-region in the area of the production of intelligent cards operations which are dependent on modern sophisticated machinery.

It has been receiving direct and indirect support from the Danish Government since 1999.

Under the then Private Sector Development Project, the Danish International Development Agency (DANIDA) assisted with the start-up of the Margins ID Group by contributing additional funds to top up the equity investment of Danish and Ghanaian partners.

Since then, various types of financing and grants have been made available at various stages of the growth of the Group and its subsidiary, by the Danish Government and its agencies.

Mr Moses Baiden Jnr, Executive Chairman, Margins Group, said after 25 years of hard work the company which he started with only 100 dollars had grown to be a trailblazer in Ghana.

The company, he recalled, started as a small business in his father’s house but has since then expanded to its present status as a leader in the area of intelligent card production and other security needs.

“The dream and thought of having a globalised identification printing company which started way back in the Law School has come into reality,” he said.

Mr Baiden said there was the need for the country to give opportunities to young talents to fulfill their dreams.

Mr Frank Oye, Executive Director of Margins Group, announced that the Group was instituting an entrepreneurial award in Information Technology to help prop up the skills of entrepreneurs to grow their businesses.