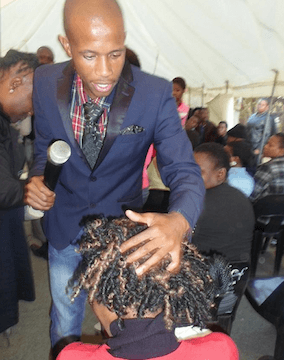 The South African preacher whose photo, showing him feeding his followers live snakes went viral on social media has admitted feeding them with lizards as well, according to a South African news outlet Times.

The preacher from Soshanguve, north of Pretoria, Prophet Penuel Mnguni of End Times Disciples Ministries who allegedly fed his congregation live snakes and was arrested Sunday and released on bail had admitted to feeding his followers with lizards as well. He is due to appear in court today, Monday July 19, 2015.

According to the report, he told inspectors that he does not keep animals but picks them whenever he finds them. The charge was brought against him by the Tshwane Society for the Prevention of Cruelty against Animals (SPCA). There are photos online showing the preacher cut a woman’s hair during one of his services and given that to his congregation to it.