A viral message circulated on social media, drew scores of nurses to the Armed Forces Public Relations Directorate for a recruitment exercise, which turned out to be a hoax.

The false message, which had gone viral, said that the Ghana Armed Forces would be recruiting health workers, and all interested persons should be present at Burma Camp in Accra with particulars and money to cover registration expenses.

Consequently, over one hundred nurses besieged the Public Relations Directorate at Burma Camp on Monday morning to explore their chances of being recruited into the Ghana Armed Forces, only for their hopes to be dashed by the Deputy Director of Public Relations, Lieutenant-Commander Andy La-Anyane.

A surprised Lt Cdr La-Anyane said, although the Armed Forces may conduct recruitment for health personnel when they are in need, no such exercise was scheduled to be held on Monday and the Public Relations Directorate issued no message to that effect.

He said that recruitment of health personnel is likely to happen in future, and the Armed Forces will announce and inform the public when the time is due.

He added that the Directorate always announces and specifies the age, education, physical attributes and other requirements for personnel who wish to be recruited, through the national dailies.

“We have not announced through the dailies, and once that has not been done, it is obvious that this message was created by mischievous persons.”

He cautioned persons who originate such messages to desist from doing so.

Interacting with the Ghana News Agency, some of the nurses who had abandoned work and come from as far as Tema, Kpando and Kete Krachi, voiced their frustration with the falsity of the anonymous message, government’s embargo on public sector employment and the resulting lack of employment avenues.

Anthony Takyi, a graduate who completed his nursing education in 2011 said: “I have been unemployed since 2011. I have dependents to support. My mother has also spent so much on me and after finishing school, there is no employment. The government is just disappointing us. I am now a taxi driver.”

The embargo on employment in the public sector was placed by government in 2010 to curb the growing wage bill. 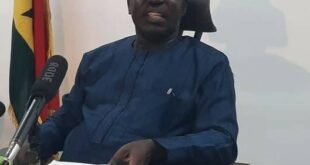 General Sergeant Mark Kakah, who allegedly collected GH¢361,300 under the pretext of enlisting a lady …