Africa World Airlines (AWA) on Monday flew its maiden flight from Accra to Lagos; a journey its founder described as an important milestone in the achievement of its goal of connecting West Africa.

“Today is an important milestone in the realization of our goal to integrate West Africa and Africa as a whole. It’s a great achievement” Togbe Afede XIV, Founder and Co-Chair of AWA said.

Speaking to journalists on arrival at the Murtala Mohammed International airport in Lagos, Togbe Afede XIV the airline’s main goal was to connect Africa by creating routes structured in a hub-and-spoke model with the KIA as its hub to allow a seamless one-change connection between multiple city pairs in the region.

AWA is currently the only domestic airline flying regional routes in general and to Nigeria in particular. Starbow started and had to suspend its regional flights to Cotonou in Benin.

Answering questions on whether the airline would be able to compete on the route where there are currently two Nigerian airlines: Arik Airlines and Aero contractors and well as international airlines like Emirates Airlines who exercise their fifth freedom by picking up passengers from neighbouring African states, he noted that AWA welcomed competition from any airline, explaining that there was enough demand on the route for more than one airline.

He also added that some of the international carriers did the regional routes due to a lack of local regional carriers and that AWA’s regional operations would complement their efforts.

“There is still a lot of need on the route. We have the financial capacity, provided by our financial partners like CADFUND and technical expertise from HNA airlines, to withstand any competition” he stated.

AWA also planed to begin flights to Brazil by the end of the first quarter of 2014 ahead of the 2014 World Cup in that country. Togbe Afede XIV said Brazil was closer to West Africa than some people thought and also had a huge black population which would ensure that the flights could be sustained even after the world cup. He said establishing a direct link from Accra to Brazil would help to shorten the distance and open up trade links between both countries.

Mr  Apiigy Afenu, Chief Operating Officer, AWA also described the feeling of their first regional flight as similar to that of a child receiving his first Christmas present from his parents and added that, the timing of the flight had been done to coincide with the Christmas festivities so they could ride the wave of increased activity and thus more passengers. He also emphasized that the airline’s main strength in dealing with competition would be in remaining reliable and offering competitive fares.

He announced that AWA would begin flights to Abuja by end of next month and subsequently other regional destinations. 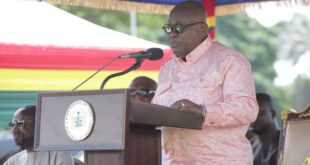 Mr Kwaku Agyeman Manu, the Minister of Health, has called for a strategic collaboration with …