Staff of the Bekwai Forest District of Ashanti Region of the Forest Services Division (FSD) of the Forestry Commission (FC), are waging a war against illegal mining in the Bunusu portion of the Oda River Forest Reserve, and the Koboro-Odaho portions of the Apamprama Forest Reserves.

Mr. Clement Omari, the Regional Manager of FSD, Ashanti Region, said staff of FSD, who were on their normal patrol duties in the two forest reserves, discovered a number of  excavators believed to belong to miners operating illegally in the reserves.

The staff called for reinforcement from the Rapid Response teams stationed in the Nkawie Forest District to join the team at Bekwai.

In a series of operations led by the District Manager of Bekwai, Mr. Rexford Twum Damoah, mining equipment including 12 excavators, 12 heavy duty pumping machines and wooden make-shift housing structures of the illegal miners were burnt down. 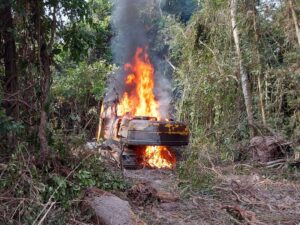 No arrests have been made yet since the illegal miners bolted upon seeing the teams and no one has come forward yet to claim ownership of the equipment.

In a related development, the Bekwai Forest District staff of FSD in December 2022, arrested three Chinese nationals who were undertaking illegal mining activities in the Oda River Forest Reserve.

The matter was reported to the police and the three Chinese nationals were taken to the Bekwai Circuit Court where they were granted bail pending further investigations. 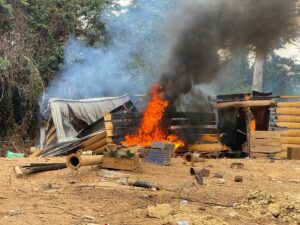 Both the Oda River and Apamprama Forest Reserves serve as watersheds for the Oda River, which is one of the major rivers in Ghana. It is home to a wide variety of biodiversity and serves as sources of drinking water to communities downstream, including the Obuasi Municipality.

In 2021, the Minister for Lands and Natural Resources, Hon. Samuel A. Jinapor, MP, declared forest reserves and water bodies as red zones and restricted areas, where no mining should be allowed to take place.

He therefore, instructed Forestry Commission to desist from issuing forest entry permits for purposes of mineral prospecting or mining in any forest reserve.

GNA to get $3m grant from AfDB to improve operations